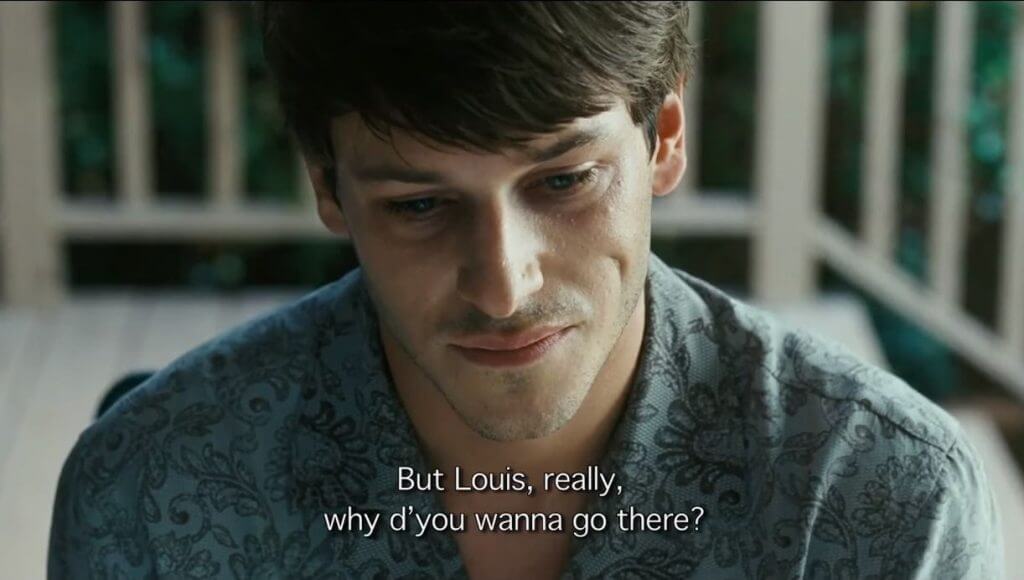 One Sunday last November, my friend Megan and I met at a French-language movie theatre in Rosemont–La Petite Patrie in Montreal. I stood in line for matinee tickets, and then Megan and I bought popcorn. I ordered maïs soufflé, un regulier; the worker at the counter squinted at me, not understanding, and so I repeated myself, embarrassed, at a much quieter volume, which did not help. (Megan ordered un popcorn—apparently food packaging has been lying to me, and no one in Montreal says maïs soufflé at all.)

I met Megan over a year ago, and we’d been vowing to see French-language movies together ever since. We’re both functionally bilingual, her better than me, but the only way to improve—and, also, to become culturally proficient, which is a different but adjacent problem to linguistic proficiency—is to seek out immersion experiences.

We settled on Xavier Dolan’s C’est juste la fin du monde (It’s Only the End of the World), which centres on a 34-year-old man who goes home for the first time in 12 years because he’s dying. His family is working-class; he is now a well-known playwright. Like most Dolan films, much of the film’s meaning exists in subtext, and it’s hard to say what details are relevant when it comes to why Louis has avoided home (does it have something to do with him being queer? Something to do with his father, who we see in flashbacks, but who is now absent?), and to some extent, whether these kinds of questions are ever really answerable. I struggled to understand the previews, with their jump cuts and tossed-off sentences, and then worried I’d signed myself up for 90 minutes of a movie I wouldn’t comprehend without subtitles, when I could have just opted to see a subtitled version less than six kilometres away. But when the film opened—Louis on the plane, narrating a monologue about his impending death and his journey—he spoke slowly and clearly enough that I could stop treating the action like a dictée, and focus instead on its emotional weight.

English is my home language—the language I speak at home, and the language in which I feel at home. I understand the connotations and denotations of any given word in context; I don’t need to work for meaning, and can instead direct my attention to other things—body language, the things people leave unsaid.

French, on the other hand, is my second language. I started learning it in school when I was nine. Learning French felt like an issue of respect to me—why not embrace the opportunity to learn one of Canada’s official languages? Though I wouldn’t have been able to articulate this as a kid, it also offered an avenue to think structurally about language, about etymology, about history and culture—a perspective on grammar and vocabulary that I wouldn’t have gotten otherwise, one that threw into relief how English compared to, and differed from, French.

These reasons are abstract. As an English speaker from southern Ontario, I could take the primacy of my first language for granted. Even now: if I head to Mexico, Brazil, Denmark or Japan, I can greet someone in my home language and have a reasonable hope they’ll understand me and be able to respond, at least if I’m in a tourist area. The cultural products I consume arrive in English, or subtitled. It comes in handy to speak French in Montreal, but even here, at least seven percent of the population gets by without French fluency.

When Anglophones take this for granted, we lose out on the type of cultural knowledge that comes only through language. It also means that we’re probably a bit arrogant—rather that humans are arrogant when placed in a situation where they can be. It means that we don’t have to struggle to translate a thought into a comprehensible sentence. That we feel comfortable laughing when a non-native-language speaker mispronounces something in English, without having to fear we’ll need to live through making the same mistakes and get laughed at ourselves.

Watching C’est juste la fin du monde felt a little like being in a dinghy instead of a proper boat, bobbing about in a sea of conversation. It was more complex to pick up on class and other details often communicated by language register. It was also easy to lose some nuance and fine detail (for instance, what exactly was Louis’s mom communicating about family dynamics when she told him he should invite his sister to visit, even if he’d never follow through?). It required more effort to understand what was going on and why.

Megan, who is also anglo, but who took immersion and has a francophone parent, felt like she understood about one in three sentences exactly as spoken, and about 85 to 90 percent overall. Like Megan, if I’d missed a word or moment, I could usually fill it in by understanding the gist of the rest of the sentence or its surrounding sentences. One detail we both missed outright involved the second flashback to a minor character, a childhood boyfriend of Louis. Louis’s older brother had communicated one quick, untethered line about him—neither of us caught it—and so we think perhaps he died, but his status remains a Schrödinger-like mystery to us.

In most respects, my viewing experience was similar to what I’d expect from any other half-decent, emotional indie movie (I cried at the end). But it was also an exercise in vague discomfort, the kind that people who speak English as a first language rarely experience, though we regularly expect the same of others. I plan to seek out this discomfort more often; I’m also well aware that the fact it’s an exercise for me is a deep privilege in and of itself.