Once upon a time, saying a film looked “Canadian” meant that it looked “low budget.” Gone are those days. Take for example, The Trotsky, one of the latest Canadian films to fall into the national and international spotlight after doing the rounds at various film festivals. Starring Canadian Jay Baruchel as Leon Bronstein, a 17-year-old who thinks he’s the reincarnation of Leon Trotsky, The Trotsky trots out a cast of Canadian actors, in a Canadian setting. The resulting creation is a film that at first glance seems, well, not that Canadian.

The Trotsky resembles any number of previous high school comedies. Kid pisses off father, kid is sent to a new school as punishment, kid wins his way into the hearts of a new group of friends, kid unites school against a common enemy and becomes the hero of the day. Modify the formula slightly and you get Mean Girls, or Rushmore, or a host of other U.S. teen comedies. 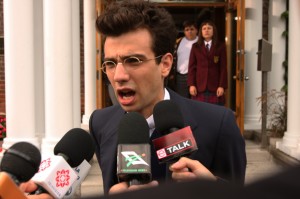 There’s no doubt The Trotsky has big potential for mass appeal, but sneaking a little Canada (or a lot) into the film hasn’t seemed to hurt it. And Canada isn’t just present in the form of its Montreal backdrop. Colm Feore, who’s had his fair share of acclaim north and south of the border and who plays the villainous Principal Berkoff in the The Trotsky, muses that “The Canadian-ness of this film is our genius for subversion while playing it straight…The gags are layered in. There are political statements under the political statements.”

Mainstream and underground films produced in both English and French Canada seem to be moving away from the brand of canned Canadiana that marked the industry for decades, instead embracing a more self-assured tone—but one that, being Canadian, whispers rather than shouts.