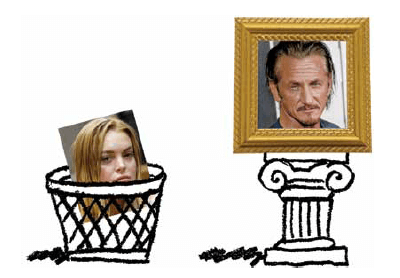 Lindsay Lohan’s 2015 Super Bowl ad for car insurance company Esurance generated more pre-game controversy than a million Deflategates. Admittedly, Lohan’s had issues with hitting people and things with her car, as well as with remembering to bring a valid driver’s licence, and not cocaine, to her next road trip. But the internet reacted like Lohan had travelled to the home of every Esurance customer, made them watch I Know Who Killed Me, raised their insurance rates, and then killed their entire family. Comments also turned to Lohan’s appearance (haggard, botoxed, photoshopped on Instagram) and her mental health (crazy, unstable, photoshopped on Instagram). The Lohanaissance failed—instead she was responsible for Esurance’s downfall. You’re welcome, Allstate.

It would be much easier for Lohan if she were a man. If you’re a male celebrity we’re quick to forget and forgive your bad deeds. Post train wreck, the careers of male celebrities recover and they’re free to become the face of auto insurance—or whatever else they want—for years to come.

Male celebrities have always had success rehabilitating their images. Celebrity Damage Control profiles celebrities as they attempt to get their lives, brand, and earning potential back after potential career killers like assaulting women, cheating on women, and being Mickey Rourke. The show’s episode guide is a reminder of how rarely celebrity redemption stories cast a female lead. Sean Penn, Tiger Woods and Michael Vick are among the males profiled; Martha Stewart is the only woman to appear in the first eight episodes.

The media has a short attention span when it comes to punishing male celebrities. Take successful humanitarian image makeover recipient Sean Penn. Before he became an Ambassador in Haiti, won countless awards, and single-handedly saved every Hurricane Katrina survivor, Penn was charged with assaulting his first wife Madonna, after tying her to a chair and beating her for nine hours. Good luck, Charlize Theron!

The media rarely discusses Penn’s violence. When they do he’s described as “difficult” or as a “reformed bad boy.” The focus is on his art; not his infidelity, his violent past or—thank god—Shanghai Surprise. The reformed bad boy image is certainly not exclusive to Penn. We see it repeatedly, most recently in December when Mark Wahlberg applied for an official pardon for racist violent crimes committed when he was teenager. These crimes are rarely mentioned when discussing Wahlberg’s acting work, and even when they are, they’re often attributed to Marky Mark. This is called the Eminem clause and enables you to attribute all the behaviour you don’t want to claim responsibility for to an alter ego. Enter stage left, Slim Shady.

Male celebrity entitlement came closer to home when comedian Bill Cosby—accused of drugging and raping 24 women at last count—performed a three-night Ontario tour in January. Despite protests and hecklers, audiences were not deterred, choosing instead to focus on pudding pops and The Cosby Show. Audience members even jumped to Cosby’s defence yelling “we love you Bill” when protestors threatened to derail the show.

It’s certainly easier to condemn a celebrity when you don’t like their work. It’s a lot harder when it’s an artist you like. The media is more than happy to accept and promote Bill Murray’s image as a likeable, fun guy—the karaoke crasher everybody loves to love. I recently discovered Murray was on the list of male celebrities accused of violence toward women, something rarely mentioned when the media discuss the actor. Among many things, Murray’s ex-wife accused him of assault and uttering death threats. As a big fan, Murray could fart the alphabet into a travel mug and I would be running for my wallet to shower him with cash and old ATM receipts.

I’m not alone in this. When news broke of Murray’s past, internet commenters rushed to his defence. Murray’s real crime seemed to be his responsibility for Ghostbusters 3 never happening, which is apparently everything that is wrong in the world (and the feminist reboot will suck because the ladies’ periods will repel the ghosts rendering bustin’ impossible).

Compare the media’s treatment of Penn or Murray, with treatment of Lohan. Her every bad deed, every bad performance, every bad choice is exhaustively chronicled, never to be forgotten. In the court of public opinion there is no disconnect between Lohan the actress and Lohan the trainwreck. She could be as likeable as Murray, giving impromptu bachelor party speeches till the end of time, but the media will never let us forget every DUI she has ever had.

Winona Ryder never beat Madonna with a baseball but, but in 2001 she was arrested for shoplifting. The media has never let her career recover—even though Saks Fifth Avenue loss prevention was arguably the only victim. It was what everybody wanted to talk about when she was promoting her new film at this year’s Sundance. Or, they focused on how great Ryder was in 1988’s Beetlejuice, a movie she made when she was 17—just as critics often talk about how great Lohan was in Mean Girls. The media keeps the actresses stuck in a pre-trainwreck time of innocence, forever reminding us of that time when they were young, successful, and had it all. The media will not allow them to make mistakes, to recover from them or to have a second act. They had their chance and they blew it. Not even getting Murray to commit to Ghostbusters 3 could redeem them.