The website “When Will Amy Winehouse Die?” reads like a macabre count-the-jellybeans contest. How many days does a junkie have left to live? Leave a guess, and a “pre-condolence,” like this one: “It’s not like you didn’t see this coming.” (This commenter chose July 11, 2008.) “We’ll miss you,” pre-eulogizes another, with a slightly more optimistic expiration date of March 11, 2011. If you’re correct, you’ll take home an iPod touch—presuming the gadget doesn’t fall into obsolescence first—and you’ll be crowned “Mr. or Mrs. Death.” “Amy is on her way out,” the site reads. “As the world is profiting from this decline, we thought it only fair that you should profit from it too.”

The same company runs the same contest for Britney Spears—this one for a PlayStation 3. It also hosts a half-dozen Europe-based websites for those looking to see pictures of Angelina Jolie’s tits or watch videos of guys wiping out on their Girls motorcycles. On the Winehouse death page, thousands have left their guesses alongside pictures of the singer in decline. Many entrants, it seems, have chosen their own birthday, with comments attached. “Thanks for the iPod!” one reads. Several say: “Die, bitch.” Others riff on Winehouse’s own lyrics: “You should’ve gone to rehab. Yes Yes Yes!”

It may be less overtly cruel than the putting a bet on when Amy Winehouse will die, but a lot of celebrity journalism appears to be a countdown to death. We watch bad girls like Winehouse stumble before us under the 24-hour surveillance of paparazzi. Lindsay Lohan gets drunk and disorderly, and crashes her car. Britney Spears is photographed without panties while the world debates whether she’ll commit suicide. Gossip blogger Perez Hilton registers another million hits, and the Bratz Pack keeps the party going.

Though her anti-rehab anthem sold more than fi ve million albums and made her an international star, Winehouse has, of course, been to rehab several times. Who hasn’t? B- and C-listers air their traumas on the latest reality show, Celebrity Rehab. Exclusive centres seem more like resorts than hospitals, with yoga, shiatsu and garden parties. Hospitalization is no longer shameful. It is trendy. 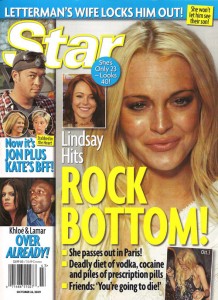 But while the young women who are famous bad girls—Amy Winehouse, Lindsay Lohan, Britney Spears, Paris Hilton—check in and out of treatment, they seem unconcerned with redemption. Rehab always seems like someone else’s choice, the advice of publicists perhaps, and our suspicions are confirmed when a week later they’re up to no good again. They remain willful and unapologetic, refusing to conform to any sense of how women are “supposed” to act. They won’t be victims, patiently suffering in silence, and they aren’t trying to be anyone’s sweetheart. We can try to make them stay in rehab, but they say, “No, no, no.” “I told you I was trouble,” Winehouse coyly sings, “You know that I’m no good.” When the world yells, “Behave,” they only give us the finger and march, empowered, toward their own death.

As viewers of this spectacle, we’re caught between pity and condemnation. “How sad,” we say, that young women are cruelly targeted by the media, contorted by our demands that they be innocent but not childish, sexy but not slutty. We may hope they get the help they need, but most of the time, we’re less generous, believing they are getting what they deserve. They are getting paid; it’s not our fault they are too stupid, and obsessed with fame at any cost, to get their lives on track. We claim to worry about their health—hence the constant supervision of weight, pregnancy, reckless sexual behaviour. After all, don’t they know that they are role models? Rarely, if ever, do we allow that this is how they choose to live, that they don’t want to be Grace Kelly and they aren’t interested in our approval.

Society as a whole once held celebrity as the paragon of what we all could be: glamourous, rich, witty, beautiful. Scandals were kept out of the press, often by the press, infidelities buried, abortions arranged; we knew little of the excesses and depressions stars faced when there was no one around to watch them. America’s Sweetheart could be our dream, even though we knew nothing about her at all—in fact, because we knew nothing about her at all. Now, America’s Sweetheart is an album by Courtney Love, another debauched rebel rockstar.

In February, New York magazine published photos of Lindsay Lohan re-enacting Marilyn Monroe’s famous “The Last Sitting”—taken just weeks before her death in 1962—a creepy homage to a woman who pioneered the now well-worn path of sexy self-destruction, performed in front of the camera for all to see. Critics charged that the photos eroticized and exploited Lohan’s own downward spiral. “They are sexual, funereal images,” wrote Ginia Bellafante in The New York Times, which “ask viewers to engage in a kind of mock necrophilia.” These eerie photos link beauty and death, equating glamour and sickness, connections that are usually well hidden or airbrushed out.

Never before has so little been kept private; now everything is published, and every inch of women’s bodies scrutinized. As David Denby wrote in the New Yorker last fall, “every part of a star’s existence, including the surgical scars and the cellulite deposits, belongs to the media—and to the public.” Rumours that Britney is pregnant are dashed when the paparazzi snap a shot of her period-stained panties. Amy Winehouse’s damaged skin is shown in high magnification on UK news sites. She is diagnosed publicly, doctors showing up in the media to speculate about cause and treatment. “Notorious junkie failing to keep up with beauty regimen,” one headline read in June. Another article calls her “a shadow of her former smooth-skinned self.”

These photos show that the illusions that prop up celebrity culture—flawlessness and mystery—can fail. What could be more subversive in an industry based on beauty than to be publicly ugly? There is a kind of bravery here—however nihilistic—that these bad girls refuse to be our royalty, to play the role of demure ingénue. “In a nation of finger-wagging, name-calling, letter-writing, comment-posting, mean-spirited, stalking busybodies,” writes Heather Havrilesky in Salon, “maybe the crotch flash is the ultimate subversive act.”

Like them or hate them, the bad girls have an honesty to them that is difficult to find elsewhere. They do what they want, sleep with whom they choose, and refuse to be guided by a morality that’s not of their own making. As Lakshmi Chaudhry writes in The Nation: “[Paris] Hilton, Lohan and their peers represent a radically new generation of celebrities who receive attention—or more precisely notoriety—because they violate rather than perform traditional modes of femininity, especially when it comes to matters of the heart.”

They “no longer feel the need to hide their appetite for pleasure, status and attention behind a giggle or a teary smile,” she writes. “It is progress—of a sort.”

I didn’t enter a guess about Amy Winehouse’s death, or Britney’s either. I’ll wait until the end to see how the story plays out. And while we, the viewers, may be all-too focused on watching these women self-destruct, the situation isn’t entirely hopeless. Today’s bad girls are tearing down the feminine ideal instead of just redefining it. It is progress. We’ll get there in the end—but it will take more than 12 steps.