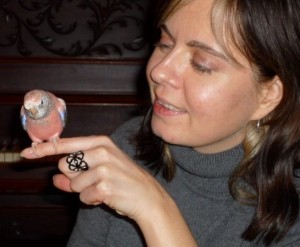 Jennifer and her bird Antonia

Jennifer Lovegrove is the author of two collections of poetry, I Should Have Never Fired the Sentinel (2005) and The Dagger Between Her Teeth (2002). Her work has been featured in a number of Canadian publications including Taddle Creek, The Fiddlehead, Sub-Terrain and This Magazine. We recently sat down with the former Great Canadian Literary Hunt judge to discuss her work, writing contest and workshops.

This Magazine: You recently had a couple poems published in This Magazine (Jan/Feb 2012), what else have you been working on lately?

Jennifer Lovegrove: Yes, This Magazine recently published my poems “Squall” and “Stove,” which was an honour; This is my favourite magazine and has been for a long time. Those two are from a batch of poems that I’ve been working on for the last year or so. It didn’t start out as a series or anything, but I see some thematic and aesthetic links in the poems now, and now I’d say they’re part of a manuscript in progress. My novel – Watch How We Walk – is coming out next year, and I’m on the verge of another rewrite – the last one before I hand it over to my editor. I promise! There are a few other bits and pieces of projects that may or may not evolve into other forms; too soon to say. Also, I am resurrecting my lit-zine dig. – 2013 will see its thirteenth issue, so writers, send me your poems and stories.

This: As a former judge of the Lit Hunt, what do you typically look for

in a winning submission?

JL: Ah, that’s a tough question. I don’t set out with a preconceived set of specific criteria or an idealized conceptualization of what the “best” will be; the poems that draw me in will be powerful, subtle, innovative, and will show themselves in time. I look for a poem that stands out, something fresh, unique, in a compelling voice and style, nothing derivative. I read them all a few times before narrowing it down.

This: Was judging the contest difficult?

JL: Well, it was a few years ago, so I don’t remember all the details, but yes, it was tough, but an enjoyable challenge. My fellow judges (David O’Meara and Mark Truscott) and I narrowed it down to a shortlist we agreed upon and then via email, we discussed and debated the top few and eventually settled on winners. We had great discussions about our poetic values and priorities and preoccupations and how these fit into the process.

This: What value do literary contest have for emerging writers?

JL: Well, as a writer who received an Honourable Mention in This Magazine’s Great Canadian Literary Hunt in 1998 when I was “emerging” (ie before my first book was published), it was definitely a literary self-esteem boost. Writers – especially early on – get a lot of rejections, and to place or be short-listed helps keep your faith a little bit. It’s gratifying to think that at least three jurors somewhere managed to agree that your poem wasn’t too shabby after all. As for the value for the many non-winners of literary contests, well I guess it reinforces that valuable thickening of the skin. You just have to keep putting it out there. You’ll get more nos than yeses but the yeses count for much more.

This: You run a variety of different workshops on writing and DIY

publishing, what advice do you have for someone who wants to get their

JL: Read widely and voraciously, write as much as you can, keep sending your work out to publications, foster positive, creative relationships with your colleagues, support the work of your peers that you admire, support your independent presses and booksellers. Take risks in your work. Scare yourself.