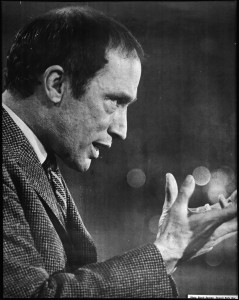 Tomorrow, let’s take a moment to reflect on the 42nd anniversary of the passing of Bill C-150, the omnibus bill that decriminalized abortion, contraception and homosexuality. The rights that Canadians have because of this historic bill are crucial to remember as those same rights come under attack elsewhere: on Wednesday, Indiana became the first state in the U.S. to cut public funding to Planned Parenthood. The same day in Uganda, gay people came close to facing the death penalty.

On May 14, 1969, The Criminal Law Amendment Act formed the legal foundations for the Canadian gay rights movement, and for Henry Morgentaler to perform abortions against — and eventually according to — the law. But it didn’t reduce discrimination, or grant women and members of the LGBTQ community full rights under the charter. Forty-two years later, how much has changed?

Abortion and contraception then:

In the 1950s, a family of five was considered small, explained former nurse Lucie Pepin in her speech commemorating the 30th anniversary of Bill C-150. Many women in rural communities gave birth to their children at home. When complications occurred during birth, the mother was rushed to hospital. If it was too late for a cesarian, her doctor had a decision to make:

Women had no choice in the matter, and neither did their doctors. But Bill C-150 at least changed the latter. The legislation decreed abortion was permissible if a committee of three doctors felt the pregnancy endangered the mental, emotional or physical well-being of the mother. Regard was not given just yet to women’s charter rights to life, liberty and security of the person.

Enter Henry Morgentaler. In 1969, armed with decisive arguments in favour of a woman’s right to an abortion within the first three months of pregnancy, the doctor began performing the procedure illegally in his Montreal clinic. An exchange in 1970 between the adamant doctor and a furious caller on CBC Radio highlighted the fundamental disagreement between the doctor and his critics about when life begins.

The debate hasn’t progressed. It has degenerated into little more than a shouting match between so-called “pro-life” and “pro-choice” advocates who still can’t agree on when life begins, or whose rights win out: those of the mother or those of the unborn fetus. And recently the Canadian debate has shifted for the worse.

In Indiana, the governor was quite happy to openly chop away at Planned Parenthood’s $2 million in public funding. Meanwhile, in Canada, subtler shifts are taking place. During the election, Tory MP Brad Trost bragged that the Conservative government had successfully cut funding to Planned Parenthood. Stephen Harper quickly denied the comments, saying he would not re-open the abortion debate as long as he is Prime Minister. However, the International Planned Parenthood Federation has been waiting for 18 months to hear whether their funding from the Canadian government will be renewed. During the election, women’s rights groups foreshadowed the Conservatives’ indecision on the matter warning Canadians that Harper would be under pressure from his caucus to re-open the debate. With a Conservative majority now in government, that pressure is sure to grow.

149 Members of Parliament agreed with Trudeau and 55 did not after he famously said “there is no place for the state in the bedrooms of the nation.” According to his omnibus bill, acts of homosexual sex committed in private between consenting adults would no longer be prosecuted. But gay sex between people younger than 21 was still illegal.

A Gallup Poll at the time that asked Canadians whether they thought homosexual sex should be legal or illegal found 42 percent in favour of decriminalization and 41 percent against. Homosexuality was openly discussed as an “illness” that ought to be cured. Progressive Conservative Justice Critic Eldon Woolliams voted in favour of Trudeau’s bill so that gays could have the equal opportunity to receive treatment. On February 2, 1969, he said casually on CBC television:

“I don’t think (homosexuality) should ever be put in the criminal code. I think it should be taken out. It should be done in a medical way so that these people could be sent to centres if we feel as citizens who oppose the feeling of this illness and this homosexuality so they could be rehabilitated.”

Woolliams appeared to sincerely (and incorrectly) believe that gay sex was a mere tendency based on environmental factors, and that the “pressure” of these factors could be “relieved.”

Before Bill C-150 was passed, “incurable” homosexual George Klippert was convicted of “gross indecency.” He was sentenced to preventative detention. In 1967, the Supreme Court upheld the decision.

Today the Ugandaan Parliament debated a bill that aimed to punish “aggravated homosexuality” by increasing jail sentences from 14 years to life. Until yesterday, the bill also proposed the death penalty for gays. The main motivation behind the legislation was preventing the spread of HIV and AIDS.

We would like to think that Canada is 40 years ahead of Uganda, but we still impose discriminatory policies to prevent the spread of what used to be known as “the gay cancer” — HIV/AIDS.

The policy of the Canadian Blood Services is to ban any man who has had sex with another man since 1977 from giving blood for the rest of his life. The organization asserts that it is arms-length enough from the government to uphold the ban without fear of violating Charter rights. The CBS also discriminates based on action rather than sexuality — a gay man who hasn’t had sex is welcome to give blood. A third argument holds the least strength: though HIV/AIDS testing has advanced over the years, the possibility of a false negative still exists.

The lifetime ban is outdated, as is the recommended deferral period of 10 years, which the U.K. recently implemented. Australia, Sweden and Japan currently have deferral periods of one year. Researchers for the Canadian Medical Association Journal have recommended a one-year deferral policy for MSM donors in stable, monogamous relationships.

We’ve progressed, but we’re not perfect. And there’s a real risk of losing what we have. On May 14, let’s be grateful to the activists that pushed the LGBTQ and women’s rights movements forward.