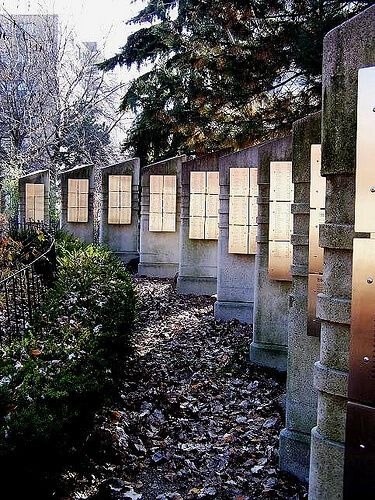 Although Pride Toronto decided to reschedule its week-long festivities in light of the G20 circus coming to town, the committee for the AIDS Candlelight Vigil, an event associated with Pride Week, decided it would take advantage of the politically charged atmosphere.

We took the opportunity to speak with Kay Roesslein, co-chair of the AIDS Candlelight Vigil planning committee, about the significance of the event, the decision to keep the original date, and what to expect at this year’s event, which is tonight.

Natalie Samson: I was hoping you could tell us about the history and background of the event.

Kay Roesslein: This is the 26th vigil and it truly began for honouring, remembering and celebrating. When it began in the 80s there were so many losses, especially in the gay circles, significant numbers were lost. We saw then over the years [the vigil] become impactful in other communities, including in those wherein substance abuse is a challenge, mental health communities, populations from various countries—that would be the slow progression over the years where losses started to impact [these and] other communities. It really was an opportunity to remember significant losses and to make a statement, to talk about awareness and to raise the flag that HIV is impactful and it can effect us all.

Natalie Samson: So it’s very much a political statement.

Natalie Samson: Has there historically been any kind of political presence at these vigils?

Kay Roesslein: Not as a rule. June Callwood was here one year and was a host…I know Kyle Rae has attended over the years, George Smitherman has. It’s really a community event. We have strived over the years to keep it a community event. We get sponsorship, yes, but it tends to be sponsorship from [not for profit and related organizations like] Casey House, LOFT Community Services, it’s from ACT [AIDS Committee of Toronto], from the Elementary Teachers Federation. But it’s not from big pharmaceuticals—and that’s intentional. The intent is to keep it a community event.

In fact, the planning committee, all the organizers, are representative from different community agencies or are individuals within the community. That way we stay true, we don’t end up with the politics that we see elsewhere, like Pride, for example.

Natalie Samson: Have you seen questionable sponsorship or politics at other vigils?

Kay Roesslein: I can’t cite any personal examples, no. I am aware though that it came up often in conversation when we looked at our programming, especially with the International AIDS vigil we had during the International AIDS Conference at Yonge and Dundas Square. We invited our local politicians to participate and they did. But again, it’s who do you invite and why, and what’s the message behind it—are we still reflecting our community.

I think one interesting area of growth is the increase in diversity. It speaks to how HIV has grown and impacted so many different communities now. Culturally, it’s all over. So what we’ve done this year, we had to make a decision. We had to decide, because Pride Toronto changed its date, it moved Pride week. Well, if we continued to do the vigil on the Thursday of Pride week, we’d be on Canada Day.  We really thought hard about this. Part of us still remains true to the grassroots cause—I mean really it’s still about honouring, celebrating, remembering and awareness. This year, we had wanted to honour those who had died or were affected by HIV/AIDS in those countries where it’s endemic. Of course with the G20 suddenly in town, we had an opportunity to marry our themes. So we are including universal access and human rights as our theme this year. So this year, given that direction around HIV in countries where it’s endemic, the G20 just made sense.

It also influenced our choice around our priority. Our priority is awareness. Our priority is human rights and universal access [to medical treatment]. And given that really we’re talking about HIV, which goes beyond a Pride event, it was appropriate to hold it this Thursday. So we did introduce the G20 [to this event] in this sense. We’re really raising the flag around awareness, saying HIV touches us all; it’s global. We need to look at ourseves in Canada, because there isn’t universal access in Canada. You can ask many aboriginal communities if they feel they have universal access.

Natalie Samson: What’s been the response to keeping the original date?

Kay Roesslein: I think there was consensus by the committee and by the community there’s been absolute understanding. In terms of it being on Canada Day, people understood not competing with that. And as people unraveled the theme of the vigil, especially with our increased diversity on our committee and in our community, it really made sense. If anything has changed over the years, it’s the diversity of our community and the diversity of the board.

Natalie Samson: Is the event run by any particular organization?

Kay Roesslein: We are a Pride event, although that was a little trickier this year because we are not fitting in their calendar since we’re happening just prior to it. So we’re an associated event. We’re associated with the 519 [Church Street Community Centre]. We hold it at the 519 at the AIDS Memorial. We read out the names each year of those who have passed each year and have been put up on the wall.

Natalie Samson: What is the AIDS Memorial at the 519?

Kay Roesslein: It’s a series of upright standing concrete slabs arranged in an arch. There’s a garden around it and it creates a semi-circle. In front of that semi-circle is a flat cemented area and all of this is raised. On each slab that goes around in a semi-circle are metal plaques engraved with names going back to ’84, I believe.

Natalie Samson: How is it decided which names go on the memorial?

Kay Roesslein: We don’t decide. Any name put forward to the AIDS Memorial Committee [through the 519] usually goes up.

Natalie Samson: And it can be an AIDS-related death from any year?

Natalie Samson: What can someone expect tonight?

We invite the audience to go on a journey with us wherein first we acknowledge the facts, the gaps, the things that may upset us and make us angry, our call to action and awareness, then we move towards remembering. That’s when we note all the names. And then we move towards honouring with the candle lighting and we move the flame into the audience. It’s quite beautiful.

The AIDS Candlelight Vigil in Toronto will be held tonight, June 24 at 519 Church Street, Cawthra Square Park, from 9-10pm.