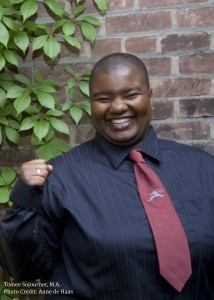 In today’s podcast I talked with Tomee Sojourner, a Montreal-based activist, educator, and consultant who concentrates mostly on workplace diversity. Tomee is also the founder of the Embracing Intersectional Diversity Project, a group that aims to connect people from different backgrounds and experiences so that they can talk openly and honestly about their differences and similarities, and generally fulfill the multicultural ambitions that Canada publicly aspires to but still, to put it politely, could use improvement.

Tomee recently made a contribution to the It Gets Better project, the series of YouTube videos begun by American advice columnist Dan Savage, which aims to reduce suicide among gay teenagers by providing some reassurance that life as a gay grownup gets better. The campaign has come in for some critique that calls it glib and unrepresentative, skewing white, male, and middle-class.

In this interview, Sojourner talks about what exactly “intersectional diversity” means, the It Gets Better project, and how people can begin the conversation among themselves about what diversity means to them in contemporary Canada.