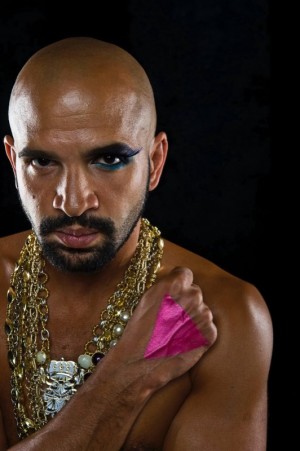 Nggrfg. For most people, the title of Vancouver actor and playwright Berend McKenzie’s play is nearly unsayable. But for McKenzie, naming his one-man play after the two slurs that plagued his childhood is the best way to understand and neutralize hatred. Audiences seem to agree: his play was a hit at the Edmonton and Vancouver fringe festivals and has since toured Vancouver high schools and even, with tweaks, elementary schools, where McKenzie talks with students about racism, homophobia, and bullying.

This: Where did the play debut?

McKenzie: It premiered at the Edmonton fringe, and then came to Vancouver and did a run at the Firehall arts centre. We garnered a Jessie Award nomination, which is our theatre award here for original script, and then we’ve done a run in Halifax for the Queer Acts theatre festival. Then the Vancouver School Board has picked it up, and I’ve done 14 secondary schools in Vancouver. We’ve adapted part of the story to work with elementary students, kindegarten to Grade 4, and another adaptation for Grades 5 to 7.

This: Really? How has it been adapted?

McKenzie: The last story in the play is called “Tassels,” and it’s based on the first time that I saw the miniseries Roots, and the subsequent bullying I received growing up in High Level and Valley View, Alberta. So we call for the Elementary schools it’s not called nggrfg, it’s called Tassels. It’s about me and my character, “Skip,” and he has a skipping rope that’s pink and he loves it and knows how to skip really well, and it has sparkly metallic tassels on each handle. A girl on the playground dares him to skip with the girls, and so he does, and then the schoolyard bully uses it as a whip and chases him around the schoolyard. So for Kindegarten to Grade 4 adaptation, we’ve taken out the words “nigger” and “fag,” because they don’t really understand it—we’ve put in “sissy” and boy and girl and cowgirl. For the Grade 5 to 7 show, we do the full thing. The story is still called Tassels but we haven’t changed any of the wording. I’m called “nigger” and some of the slave names from the show. We have some fairly lively talkbacks afterward.

This: So there’s a talking session after?

McKenzie: Definitely, a debrief after.

This: What kind of responses do you get from the kids in elementary school?

McKenzie: Everything from shock to a sense of almost relief that they can actually talk about it.

This: These are things that are present on the playground already?

These students, they hear it in music and on TV, they hear it everywhere, but they’re told “just don’t say the words.” We got a comment from a Grade 6 blonde girl at the end of one talkback—her teacher who had a Grade 6 and 7 split class, so he got permission from all the parents to bring them to the show at a high school—and in front of 300 strangers, she asked me how does the word “nigger” affect me now. And she didn’t say “the N-word,” she said the word “nigger,” and it was really awesome, because I thought: when will she ever use this word in this context ever again? When will she feel safe enough to use it? The only time she will ever probably use this word—if she chooses to use it—will be probably in a confrontational, possibly violent way.

This: How does the word affect you now? Obviously it affected you negatively when you were younger and that’s what led to the themes in the play. How does it affect you now when you hear it?

McKenzie: It depends on the context. Often, in writing the show, I had to come to terms with how I felt about the words. I kind of had a feeling about how I felt about the word “faggot,” but I didn’t know how I felt about “nigger,” because I had shut down a lot of those memories. I never used the word, I hated the word, and at one point I thoght the word should be banned and that we should get rid of them and that would take their power away. But I sort of talked my way out of that. Now, performing the show, it’s a day-to-day thing for me: some days I can say the title nggrfg without hesitation and depending on who it’s in front of, say it without shame. But sometimes, depending on how I’m feeling and who I’m talking to, I’m a little apologetic about the title, I will not say the name, I’ll spell it out, N-G-G-R-F-G. It depends on how I feel about the word on that specific day.

I think there are still better words in the English language to say hello to a brother or a sister, or a friend, or a loved one. The word “nigger” doesn’t need to be used. As for “Fag”—gay culture, we’ve really been known to take what’s used as weapons and flip them around, put a feather boa and some sequins on them and maybe some high heeled shoes, and then throw it in your face, and say, “You think that’s a fag? This is a fag.” And then we use it on each other.

It depends on context. I’ve sat in movie theatres, and I still cringe when I see same-sex couples kissing, not because it makes me uncomfortable to see them kissing, but I wait for that often-heard mumbling of the word “faggot.” We’re in the dark, no one knows who’s there, but it feels like it’s directed towards me. And that makes me feel unsafe. The words make me feel unsafe often, and this play has allowed me to feel safer using the word “nigger.”

What I’ve realized is that it’s not the word. It’s not the words themselves that are the negative—it’s the people and the reasons why the words are being used and in what context. It’s a different thing when a young student says I hear the word “nigger” all the time in the hallway, or I was called “faggot” last year all the time. When Aaron Webster was being chased through Stanley Park being beaten to death, being called a faggot, or blacks being called “niggers” all the time in the South in the U.S., it’s a different thing.

That’s all that we’ve understood up to this point, that’s all we’ve heard are the negatives about the words. If there are any positives—which I don’t know—it’s that the words have shown us where we have come from. And the words show us that if we’re not careful we could be back there very, very easily. And now the word “nigger” is being replaced by “Muslim.” Or “terrorist.” Anything that’s different is deemed unsafe or something to be scared of.

This: There’s a lot of debate, obviously, about what words we should be allowed to say. Can you give me some thoughts on why censorship misses the point in this case? If no one said “nigger” or “fag” again, some people would make an argument that that would be a great thing.

McKenzie: Yeah, it would be a great thing. I think we would find something to replace it that would be just as evil. I think the words “nigger” and “fag” exist for a reason. I don’t believe in accidents. I believe that everything here is here for a reason, and that’s my own way of being in the world. I grew up believing that God made a mistake with me, when It or He chose to make me. I was put up for adoption. I was adopted into a white family, so I was the only black child. And being the only black child in many of the small towns we lived in, I felt alone. Even though there were a lot of us in the family, I still felt alone. And when I realized that I was gay, which was at a very young age, I thought that God hated me. And through living now—I’m 42, I never thought I’d live to see 42, I didn’t think I’d live to be 12, let alone 42—I’m starting to realize that the words are here for a reason.

Language is not something to be feared. Language is delicious. I don’t necessarily believe that the word “nigger” is delicious, but I think that what happened within the school system here in Vancouver, and will be happening in Toronto in the next year or two, what’s happening with the students is delicious, because for the first time they’re able to exhale and tell their experiences and their fears, and their experiences with the words and what those words have done to them. That’s delicious to me, there’s nothing better than listening to a group of kids, students, discussing.

After the discussion they walk away with written commitments saying that we will stop homophobia and bullying and racism in our school. In places like Surrey. Surrey has a reputation, a Surrey Girl is easy, it’s kind of trashy, and low rent, and you know, I went out to the schools with my own ideas and notions of what Surrey was, and was blown away by how accepting [they were.] They had one of the largest Gay/Straight alliances that I’ve seen in all the schools I’ve been to—like, 20-strong, where queer youth can be themselves and walk through the hallways without fear of being beaten. Or if they are harassed, they feel safe enough to go to someone to get help.

This: That’s an odd thing to hear from someone who’s doing your makeup.

McKenzie: Yeah, from a Drag Queen who’s doing your makeup. From someone who’s experienced their own forms of homophobia. And racism and homophobia are so exactly the same, I feel. They’re exactly the same, what happens to the person who is the target of either, the same things happen to them, in identically the same way. You feel fear, you feel less-than, you feel, at least for me, unsafe, unvalued, not worthy, the list goes on and on and on. I think the blacks that were hanged, and slaves that were caught and tortured and whipped, feel the same things that Matthew Shepard did when he was tied up to the fence and left to die. It’s the same thing that women feel when they’ve been assaulted. Women feel the same type of thing. There’s another word for women that’s the identical word for the replacement for “nigger” and “fag,” and you know what that is and I don’t need to say it. It’s all meant to oppress.

McKenzie: I think as we become, as a society, more enlightened—and in some ways we are more enlightened—I believe as we go on, we will be able to. But it’s a long road. We seem to be going leaps and bounds in Canada as far as gay rights and human rights—gay rights being a part of that experience, or women’s rights—and teaching in school about bullying and homophobia and Gay-Straight alliances, and gay marriage, and all that stuff. And then you read in the paper 15 kids in North America killing themselves because they’re bullied because they’re perceived as, or are, gay or lesbian. And so there’s a disconnect there, and it’s confusing. It was confusing for me to see that happen in such a short span, and I think here in Canada… I think Vancouver’s the first school board in North America, and I think the world, putting a show called nggrfg in front of students. I don’t know any other school board is doing that.