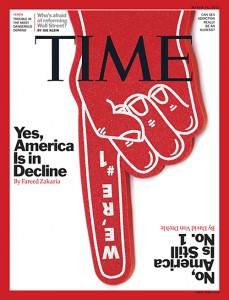 That wild bolshevik magazine Time has had the gall to question the notion that America is the best country in the world. The March 14th cover story, by Fareed Zakaria displays a red foam finger the reads “We’re #1” pointing downwards. “Yes, America is in decline,” reads the caption.

Some could argue that the U.S really hasn’t been in the best shape for a while now. In Canada, we have this crazy notion that Americans—occasionally—look at things from a different angle. Speaking of backwards, turn that Time cover upside down and there is a caption that reads “Yes, America is still No. 1.”

Of course the statistics say that over a year ago the unemployment rate was the worst it has been since 1983, with 15.7 million Americans out of work. Also, the U.S. is starting to fall behind other nations in terms of life expectancy, infrastructure, and is now only the 4th strongest economy in the world.

CNN specials airing this past weekend tried to advise the discouraged and unemployed with strategies on how pull themselves up by their boot straps and get back to work.

Of course this might require learning some Mandarin and having your evening news read by—gasp—a Muslim. Shockingly, some Americans aren’t too happy about this, because while millions have been out of work they have also been living under a rock. The comments on the CNN web page describing Fareed Zakaria’s feature story and his TV special “Restoring the American Dream: Getting Back to #1″ show how truly excited and open American audiences are to inform themselves and discuss change. The comment section is a swamp of racist horror that you do not need to read in full. But a few choice excerpts illustrates the point.

One commenter asks “Why is CNN/Time giving this MUSLIM a platform to trash America?” Then he/she proceeds to tell Zakaria (degrees from Yale and Harvard in hand, presumably) that he should go back to where he came from: his “shit-hole birth place INDIA.” Another asks: “Is he even American? It seems he would more likely be worried about where he is from. We don’t need some Indian telling us what we should be doing.”

Yes, America, though your economy is teetering, your political system dysfunctional, and your populace increasingly unhealthy, when it comes to weird xenophobic internet trolls, you truly are a city on a hill.