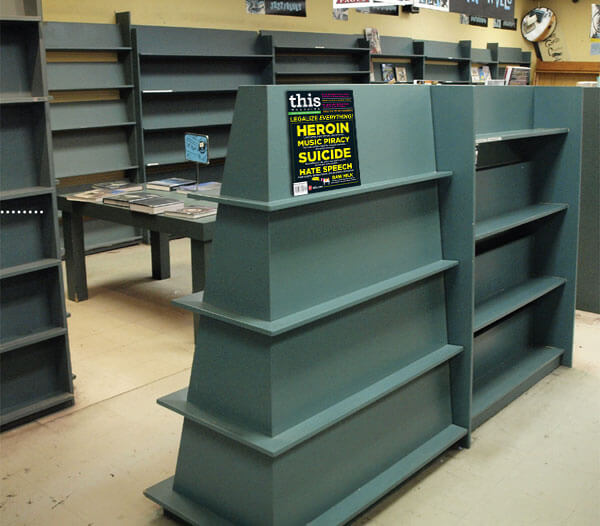 The almost-bare shelves of Toronto's Pages Bookstore in its final days. Daniel Tencer writes about the plight of independent booksellers in the November-December issue of This Magazine.

The November-December 2009 issue of This Magazine is now snaking its way through the postal system, and subscribers should find it in their mailboxes any day now. We expect it to be available on newsstands next week, probably. (Remember, subscribers always get the magazine early, and you can too.) We’ll start posting articles from the issue online next week. We suggest subscribing to our RSS feed to ensure you never miss a new article going online, following us on Twitter or becoming a fan on Facebook for updates, new articles and other sweet, sweet This action.

This issue is our annual mega-hyper-awesome edition (64 pages instead of 48!), as we bring you a special supplement with the winners of the 2009 Great Canadian Literary Hunt.The winners this year were:

On the cover this month is a special package of articles we call Legalize Everything! — five writers tackle five things that should be legalized, and the activists who are fighting to make that a reality. Katie Addleman witnesses the madness of the drug trade, and the misbegotten “war on drugs” that criminalizes the mentally ill, funnels billions of black-market dollars into the pockets of narcoterrorists, and never actually reduces drug use. Tim Falconer asks our politicians to legalize physician-assisted suicide and allow Canadians to die on their own terms. Jordan Heath Rawlings meets the artists who believe that online music sharing may actually be the future of their industry, not its end. Laura Kusisto says criminalizing hate speech erodes Canadian democracy and offers no meaningful protection for minorities. And Rosemary Counter hunts down the outlaw milk farmer who wants all Canadians to have the right to enjoy unpasteurized milk, even if he has to go all the way to the supreme court to do it.

Elsewhere in the magazine, Meena Nallainathan surveys the state of Canada’s Tamil community following the defeat of the Liberation Tigers of Tamil Eelam last spring, and meets four Tamil activists who may hold some answers for rebuilding a Sri Lankan nation tormented by decades of civil war.

All that, plus James Loney on the Canadian government’s attitudes towards its citizens trapped abroad; Bruce M. Hicks on what Canada’s new Mexican and Czech visa restrictions are really about; Paul McLaughlin interviews B.C.’s Prince of Pot, Marc Emery, on the eve of his American incarceration; Dorothy Woodend on a new crop of documentaries that dissect the workings of our capitalist world; Darryl Whetter gives his picks for the must-reads of the first decade of the 21st century; Navneet Alang warns that when it comes to online charity, sometimes clicking isn’t enough; Lisa Charleyboy profiles Nadya Kwandibens and her photographic exploration of the urban Aboriginal experience, “Concrete Indians”; Aaron Cain sends a postcard from San Salvador, after a chilling meeting with some right-wing politicians on the verge of a losing election; and Jen Gerson ranks Canada’s political leaders on their Facebook and Twitter savvy.