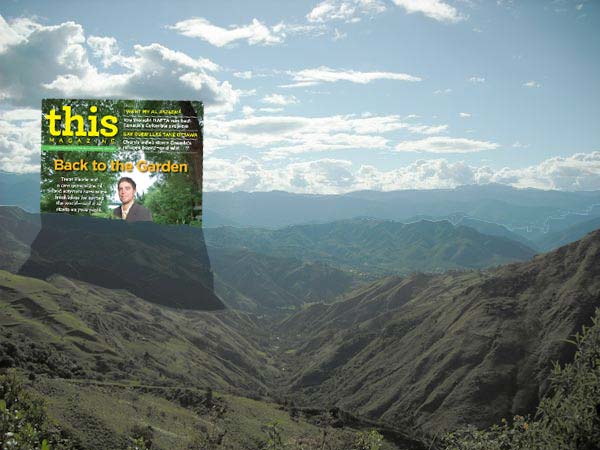 View (slightly altered!) from Sacred Sueños, outside Vilcabamba, Ecuador. Read Jenn Hardy's cover story on permaculture in the July-August 2009 issue of This Magazine.

The July-August issue of This Magazine is now in subscribers’ mailboxes (subscribers always get the magazine early, and you can too), and will be for sale on better newsstands coast-to-coast this week. Two pieces from the issue are already online: Jenn Hardy‘s cover story on the new generation of farmers using the principles of permaculture to radically reshape our food system; and Navneet Alang‘s column on emergent “real-time citizenship” on the web. Everything else will gradually trickle online in the weeks ahead, so keep checking back for more. You can subscribe to our RSS feed to ensure you never miss a new article going online, or follow us on Twitter for updates and links to new content.

Here are some of the other features you’ll find in the July-August issue: Dawn Paley writes from the Cauca Valley, Colombia, about the plight of sugar-plantation workers there, and the Canada-Colombia Free Trade Agreement that threatens their already tenuous working conditions. Morgan Dunlop‘s feature on modern church sanctuary tells the story of three Canadian church congregations who took in refugees whom Immigration Canada wanted deported, and the larger fight for a more just and humane refugee system in this country.