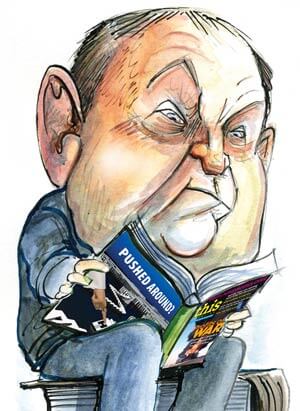 Nova Scotia NDP Premier Darrell Dexter has a lot of reading to do, including This Magazine. Illustration by David Anderson.

The September-October 2009  issue of This Magazine should now be in subscribers’ mailboxes (subscribers always get the magazine early, and you can too), and will be for sale on your local newsstand coast-to-coast this week. All the articles in the issue will be made available online in the weeks ahead, though, so keep checking back for more. We suggest subscribing to our RSS feed to ensure you never miss a new article going online, following us on Twitter or becoming a fan on Facebook for updates, new articles and other tasty links.

On the cover of the September-October issue is Anthony Fenton‘s special investigation into the world of Canadian private security firms, armoured-car manufacturers and oil companies that are profiting from the chaos in Iraq. While Canadians are justly proud of the fact that we declined to join the misbegotten “coalition of the willing” that occupied Iraq in 2003, Fenton finds that in many ways — politically, economically, militarily — Canada’s involvement in Iraq today is deeper than ever. Three years after the legalization of same-sex marriage in Canada, Paul Gallant surveys the terrain of LGBT activism and finds it increasingly deserted. Marriage certificates in hand, middle-class gays and lesbians have drifted away from the movement, he finds, while the underfunded and burnt-out activists left behind say there’s still plenty of work to do. And reporting from Israel, Grant Shilling meets the beach bums, peace activists, and former soldiers who believe that the region’s world-class surfing could be one way to bring Israelis and Palestinians together—if only he can deliver a load of wetsuits to Gaza.

There’s plenty more, including Paul McLaughlin‘s interview with new Nova Scotia NDP premier Darrell Dexter; Sienna Anstis profiles the remarkable long-distance relationship between the University of Manitoba’s microbiology lab and a sex-worker clinic in Nairobi, Kenya; Andrew Webster meets the  independent videogame designers who make Canada an increasingly important player in an emerging art form; Hicham Safieddine says that during the election uproar over the summer, Western mainstream media got it wrong about Iran—again; Soraya Roberts finds that, in choosing Veronica over Betty, freckle-faced comic-book icon Archie Andrews has subverted seven decades of cultural expectations; RM Vaughan tests the limits of his solidarity during Toronto’s great municipal strike of summer 2009 as the litterbox threatens his sanity; Laura Kusisto digs into the real numbers behind Saskatchewan’s plan to pay $20,000 to recent graduates who choose to settle there; Souvankham Thammavongsa sends a postcard about the strange nighttime happenings in Marfa, Texas; and Darryl Whetter asks why, when 80 percent of Canadians live in cities, so much of our fiction takes place down on the farm.

PLUS: Chris Jai Centeno on University of Toronto budget cuts; Emily Hunter on overfishing and the seafood industry; Jenn Hardy on the DivaCup; Milton Kiang on better ways to recycle e-waste; Navneet Alang on microblogging service Tumblr; Jason Anderson on the Toronto International Film Festival; Sarah Colgrove on Len Dobbin, the Montreal jazz scene’s most important audience member; Kelli Korducki reviews Who’s Your Daddy?: And other writings on queer parenting; and Graham F. Scott on net neutrality and the CRTC.

With new poetry by Sandra Ridley and Lillian Nećakov, and a new short story by Kathy Friedman.