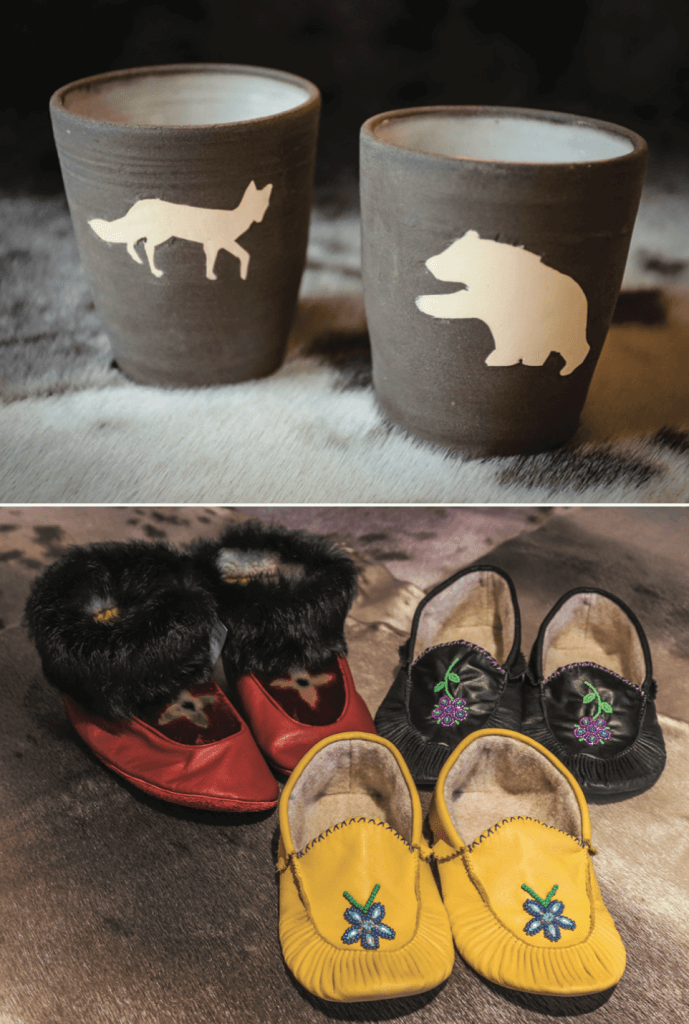 Think of the dreamcatcher and it evokes a familiar image. A hoop, a woven web, adorned with beads and feathers. The iconic talisman, said to have originated from the North American Ojibwe, is a common sight in most Canadian souvenir shops. But don’t believe its “Made in Canada” label. More likely, it’s been mass produced overseas and imported into Canada for pennies on the dollar. What may cost you $5 at the shop is costing Indigenous artists their livelihood.

Reclaim Indigenous Arts is an education campaign designed to inform the average consumer of just that. Many Indigenous people rely on arts to make a living, says Jay Soule, artist and co-founder of the initiative. The import and sale of mass-produced knock-offs of Indigenous art pieces is a problem for creators who have spent their lives learning the methods and cultural significance behind the goods. “It’s creating an atmosphere where consumers don’t understand the difference of real, handmade Indigenous arts and crafts,” says Soule.

Why would the average consumer spend $50 on a genuine dreamcatcher that uses real red willow and actual sinew for the web when they can buy an imported facsimile made of faux-feathers and plastic beads for just $10? That’s why the campaign is urging consumers to take action and spread the word as far as they can.

The initiative features a letter-writing campaign to local councillors, souvenir shops, and even Prime Minister Justin Trudeau, a template for which you can download from the website, sign, and send. The goal is to actually enforce a UN act that Canada has technically adopted, which gives Indigenous people the rights to protect their traditions, customs, and art, with the hope to eventually ban the import of cheaply made, inauthentic Indigenous art. Down the line, the initiative hopes to repatriate sacred objects and art that are either on display in museums and galleries or lay forgotten in archives—and were taken without permission from Indigenous communities in Canada. According to Soule, these ancient injustices set the stage for what’s happening today.

“This is why Canadians and businesses feel that it’s okay to do this,” says Soule, “because Canada itself has been the leader of cultural appropriation for the last 150 years. It sets a precedent for the devaluation of Indigenous arts and crafts.”

Today’s charged political climate and various high-profile incidents of cultural appropriation were the catalysts for Soule and Montreal-based entrepreneur and founder of the Ashukan Cultural Space, Nadine St-Louis, to launch the initiative.

The response has been positive, says Soule. In fact, the campaign has even garnered the attention of Hamilton city council, which is considering taking a closer look at ways to combat cultural appropriation.

In the meantime, he suggests being careful when purchasing so-called “Made in Canada” Indigenous crafts. Ask the shopkeeper who the artist is or which community the piece is from. “Most likely if they don’t know the answers to those questions, they’re not handmade,” says Soule.

After being taken away from their culture, many Indigenous people are connecting to their traditions through art—and are trying to make a living. It’s a task difficult enough without cheap rip-offs made in an overseas factory flooding the market. Soule brings to mind a powerful comparison, citing the recent police raids in Markham, Ont.’s Pacific Mall for selling counterfeit designer fashion brands.

“Why would the police raid a store on behalf of Louis Vuitton and Coach…but not give us the same respect and protect our arts?”