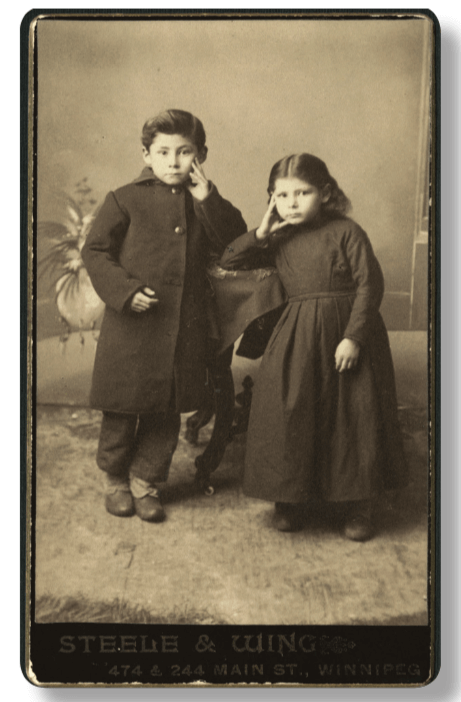 A freestanding wall decorated with blue motifs frames a glass case. Inside the case sits a brooch inscribed with a person’s name and dates of birth and death. On the other side of the wall, the front of the brooch is exposed: a portrait of a little girl, Alice Walker, the daughter of Canadian artist Horatio Walker who died at the age of nine from diphtheria—a disease that was once a common cause of death among Canadian children.

A Little History, an exhibit in the Canadian Museum of History’s Treasures From Library and Archives Canada (LAC) gallery, presents 36 artifacts that elevate children’s voices and presence in Canadian history. Some voices include daughter of Sir John A. Macdonald, Margaret Mary Theodora Macdonald, Sandford Fleming, and David Suzuki.

“I thought this was an opportunity to highlight this sort of little-known aspect of Canadian history,” says exhibit curator Carolyn Cook. “Children are typically absent from the historical narrative, and I think it’s important to look at what their experiences can shed light on. Because, really, they have their own stories.”

Many artifacts that were found and kept about children were actually produced by adults: government records, art, toys, textiles. The things that children made themselves were not prioritized. These things “kind of provide a more romanticized view of childhood.” Cook sees this exhibition as a step toward improving practices that include children’s history in Canada’s historical narrative, in all its unromantic glory.

We often forget that children lived through historic events, and that adults aren’t the only people who have been affected by them. A display houses a diary by 12-year-old Eleanora Hallen in which she details her voyage across the Atlantic from England to Upper Canada in 1835. She describes everything from a tussle over steak to seeing an iceberg for the first time.

In another display sits a photograph of a young David Suzuki on the back of a pick-up truck with his two sisters—the photo was taken inside a Japanese internment camp. Accompanying the photo is an interview with David Suzuki, who describes his relationship with nature while in the internment camp and speaks about how dangerous discrimination can be. Cook is right, the gems of the exhibition lie in the heart of the child, not in the hearts of the adults who know what’s best.