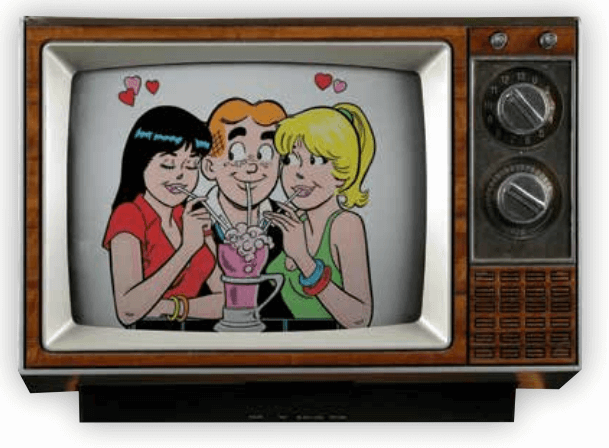 The camera pans the much-anticipated pep rally, tasked with cheering-up the students of Riverdale High after their classmate’s recent murder. The cheerleading squad performs a dance to a mash-up of “Sugar, Sugar” (aptly, by The Archies), and even though the choreography is composed mainly of coquettish shrugging, the performance is so emotionally damaging to Cheryl Blossom—twin sister to the murdered student—that she hallucinates her brother’s ghost amid the varsity football team. Retreating from the stage, she dashes into the empty football field. The crowded bleachers strain to look. Where is she running? The bright lights of the stadium show nothing’s there. Look as hard as you want, there is nothing anywhere.

I should begin by stating that while I collected Archie Comics as a kid, I am not so imprisoned in my childhood as to receive any deviation from the original script as a personal affront. In fact, The CW’s Riverdale—a modern adaptation of the inter-generationally adored comic strip—is in such desperate need of some 21st-century reality that, as I binged all available episodes on Netflix, I became so empty of human emotion as to doubt if I’d ever had a childhood at all.

The overall quality of Riverdale, filmed in Vancouver, can be best conveyed through its shape-shifting setting. Almost every meal of every character is eaten at Pop Tate’s 24-hour diner, presumably making it Riverdale’s only restaurant; but, in episode seven, Veronica and her friends go clubbing, taking advantage of the anonymity needed for underage drinking, and swaying the night away on a sardined dance floor. Everyone of adult age seems to have gone to school together and then procreated at a similar time—their children are now all in the same grade—meaning the town’s generations progress in small, cohesive waves. Yet, during episode four, the Southside Serpents gang is introduced, leading the viewer to assume that Riverdale is not only large enough to support organized crime but is too large to be taken over by it entirely. Speaking of the law, Riverdale is a one-sheriff town, but that sheriff is totally fine with interrogating minors without parental or legal presence, much in the way of a rogue cop from Baltimore.

The borders of Riverdale are amorphous and highly adaptive, able to shift in order to suit the storyline. Because of this malleability, Riverdale functions as the physical embodiment of the most powerful political force of our time: nostalgia.

Critics state Riverdale echoes Pretty Little Liars and Teen Wolf—two shows I have admittedly never seen but am confident I can deduce the entirety of both plots from their respective titles. I, however, would argue that Riverdale is unique as it uses nostalgia for its sole source of fuel, having no need for sustained story, escalating tension, character development, or even actors who can deliver lines without sounding like a Speak & Spell. Despite this vapidity, Riverdale should not be cast aside as irrelevant. The series parallels our current cultural moment to a degree not televised since The Wire. While Netflix is suddenly brimming with millennial reboots (Gilmore Girls: A Year in the Life, Fuller House) and with more on the way (X-Files), Riverdale speaks to the possible perils of this movement—where old ideas are favoured over new, stasis over progress, what once worked over what could.

You don’t need a literary scholar to tell you Archie Comics had a troubling history with whitewashing. The television revamp afforded the brand a second chance at diversification. But it’s easy to deduce that Riverdale opted to play it safe and keep Archie’s original demographic: the young and the white. Characters who mean nothing to the show’s storylines are cast with people of colour: Mayor McCoy, Reggie, Mr. Weatherbee, Pop Tate. This diversity quota only serves to bolster the status of the show’s caucasian protagonists as Riverdale’s central characters are forever-frozen in their whiteness. (There is a chance that Veronica’s mother may be Latin American or Spanish because of two throw-away mija references, but neither Veronica nor any other character makes mention of her possible non-white heritage.) And in the script, every actor—even Indigenous Samoan KJ Apa, who plays Archie, and Brazilian Camila Mendes, who plays Veronica—conforms to the show’s white-passing ideals. In Riverdale’s attempt to modernize, however, the show’s writers change the one character who—through the original creator’s own ignorance—represented a non-normative identity: asexuality. With the sound of locking lips with Betty Cooper, Jughead Jones joins the fold.

The show’s caucasian normativity may simply be a reflection of the setting; small-town America (or however big this town is) isn’t often thought of being a fruit medley. But that lack of diversity only makes questions like Veronica’s unspoken ethnicity even odder. And why doesn’t the show focus on a Black principal of a white school but instead spends spine-bending hours on the social struggles of Archie, television’s dullest character since the yule log? Betty Cooper can drug, handcuff, and water-torture a Black athlete, Chuck Clayton, in order to solicit a confession of slut-shaming, and the only fallout is Chuck’s expulsion from the football team—not a peep about segregation, Ferguson, or even the Geneva convention.

Riverdale desires to comment on contemporary issues while being simultaneously terrified of doing so. Here, we see the lure of nostalgia: to live in a time when identity wasn’t an ever-present, ever-crushing reality; when racial issues were limited to the margins and the marginalized; when polite society asked nothing more of us than to start sentences with, “I’m not racist, but…” before saying something that was, indeed, quite racist.

Nostalgia is built off false history. As historians repeatedly state, the past had an unending line of phobias that favoured the few at the cost of the many. Nostalgia now holds such sway, however, because millennials from Riverdalian demographics (of which I include myself ) may be the first generation who are able to statistically prove the past was better than the present; now, there are no jobs to work, homes to buy, exciting new flavours of soda to experience. But to be nostalgic is to pout in the well-worn throne of privilege, picking at the seams, while waxing wistfully about when all chairs were made this well.

Much like the after-school specials of old, Riverdale’s characters approach all problems with the same apocalyptic frenzy. Whether it’s solving the show’s central murder or getting into the school’s talent show, the dial of every character is cranked to 11. And since the plot cares about everything, it also cares about nothing. Which, to be fair, is a startlingly apt dramatization of a Facebook feed. But the upshot of this unceasing urgency is the writing becomes so incredibly bored with itself that, like a clicktivist, it abandons most ideas before its conclusion.

In turn, the show offers various threads that, as of writing, have been mentioned once and immediately abandoned. A complete list of these untied threads would last longer than the series. The following is only a highlight reel: Moose, a brawny varsity athlete, is queer and in the closet; his girlfriend, Midge, is alluded to but never seen. Chuck Clayton, the aforementioned recipient of Betty’s Guantanamo justice, is cut from the football team for slandering women; but his father, who is also the school coach, is revealed to have previously covered for his son’s transgressions though remains gainfully employed. And Jughead, who is homeless and living Harry Potter-style beneath a staircase in the high school, can somehow afford a MacBook Pro on which to type a novel that acts as the show’s narration—a novel which is able to exist outside the confines of time as it repeatedly predicts future (“On Tuesday, half-way through fifth period, the first arrest would be made.”). Also, how can the leader of the Southside Serpents still hold down a full-time job as a construction worker? And where the fuck did Archie’s dog, Vegas, go?

Rather than working against the show, however, these shortcomings all aid its thesis: none of it matters. It would be incorrect to call Riverdale self-indulgent because to do so would imply that Riverdale has a self to indulge. Much like nostalgia itself, when you put even the slightest weight upon the series’ internal logic, it collapses. How could Archie go the entire summer without seeing anyone except Ms. Grundy and Jughead? Who cares? You don’t need narrative when you have neon lights radiating across a blonde woman’s face.

Riverdale has a preternatural ability to disengage with the present moment, incessantly historicizing itself by casting its gaze from the future; for example, after the town’s drive-in is demolished, the audience is gifted the lines, “Maybe they’ll save it. All the pieces. Store it in the town hall attic and rebuild it in a hundred years. Wonder who the hell we were.” I, too, am wondering who the hell you are, Jughead. This show has made me wonder the same of myself. Nostalgia speaks to an idea of return, to times of simplicity: when teenagers were shot for mysterious and glamorous reasons, not for wearing a hoodie. But the problem with return is that doing so demands you turn your back on contemporary issues like race, gender, and (in the case of Pop Tate’s Diner) America’s diabetic death-drive. Riverdale’s creators have confused the rearview with the windshield, believing they’re hurtling forward instead of swerving haphazardly in reverse; it’s as if they actually believe their pilot could drive us toward a new, modern, high-definition understanding of ourselves. I’d like to see them try. Please—I mean it—try