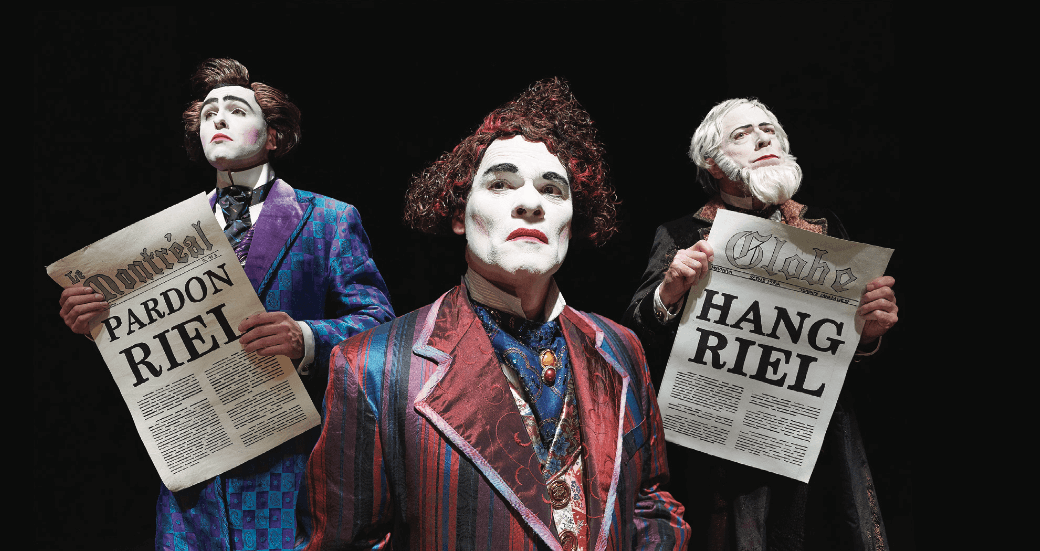 Walking into a small room, I am greeted by an usher as songs about Louis Riel and Canadian identity foreshadow the upcoming play. I take my seat across from the centre of what I assume is the stage. Scarlet curtains frame a black window made to look almost as if you are peering into a TV screen. Above the stage, Comedy and Tragedy Masks take the shape of maple leaves, accentuating the name of the theatre company responsible for the next two hours of hilarity and history: VideoCabaret.

The play I am about to see is the first of a summer-long, two-part series called Confederation & Riel and Scandal & Rebellion, which is about the struggle of forming the Dominion of Canada. These plays do much more than entertain, though–they teach. They are a clear feat to anyone who fought to stay awake during their grade school history classes: Canadian history has become interesting. They manage this through a type of speed, wit, and hand-eye coordination that left me flabbergasted at how much I didn’t know before walking into this room.

The theatre company, founded in 1976, utilizes video cameras, hot-wired televisions, and the power of rock ’n’ roll to engage its audience in plays concerning mass media politics. Since then, VideoCabaret has toured the world, won a total of 23 awards, and produced over 15 plays. The Confederation series, being shown at Toronto’s Soulpepper Theatre, is part of a 21-part play cycle written by VideoCabaret co-founder Michael Hollingsworth that dramatizes and satirizes four centuries of Canadian history in all of its problematic glory.

The plays aren’t what you would think of when hearing the word “theatre.” They are presented in black-box style, where the entire theatre is darkened save for a sliver of light that reveals the actors and subtle projections on hidden screens that form a setting. Hollingsworth’s goal is to create scenes that are under one minute. With speedy character introductions and successional quips that leave no time for afterthought, it’s inconceivable that only eight actors cross the stage, each having more than five roles.

As the play progresses, there is no time to mentally review what you know from elementary school. The play presents a story of Confederation through archetypes that made the characters and plot identifiable, leaving no room for second-guessing the difference between the Fenians and the Orangemen.

In today’s fast-paced age of content creation, the average Canadian’s attention span is eight seconds. VideoCabaret’s theatrical splicing of the lesser-known facts of history has created an indispensable teaching tool that stands its ground in a time where celebrity featured commercials and clickbait titles vie for our attention. VideoCabaret’s Confederation doesn’t ask for your attention, it grabs it, and doesn’t let go until you’ve learned a thing or two about the True North.