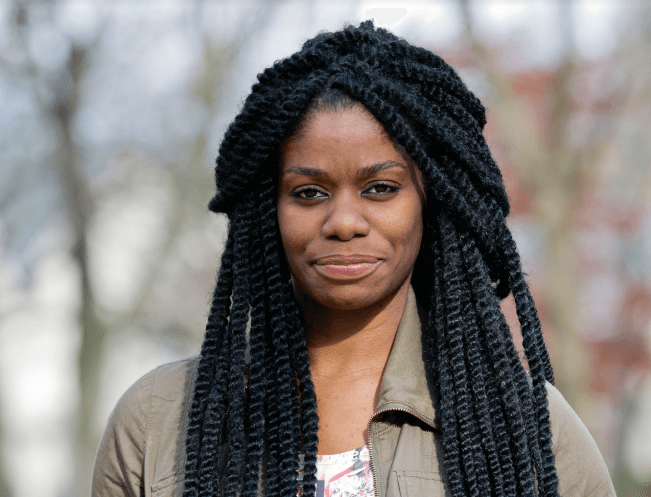 Like much of Toronto, the Yonge and Eglinton neighbourhood has undergone great change. As condos crop up on nearly every street corner and new transit lines are built to expand the city, the midtown area, frequented most by businesspeople and commuters, has seen vast growth. Nothing is stagnant, and the streets are a hubbub of honking and screeching. Even amid this noise, Caroline Akwe attracts Torontonians with her music.

On a cool September evening, Akwe sits near the intersection belting out powerful soul and playing gently at her keyboard. Onlookers stop and sit at Akwe’s side and sway to her tunes—a blend of hip-hop, alternative, and pop music. Also beside her is her notebook with scribbled lyrics, and her boyfriend, Nick Seo, picks up what the wind scatters. Together, they form the duo Les Kingdoms.

Akwe is a soft-spoken young Torontonian originally from Haiti. Growing up there, amid civil strife, she and her family would find refuge in music. “From a very young age, I would listen to music with my friends, but I would hear it differently,” she says. “I thought about it more. I analyzed it.” Her mother would often play music in the house, pushing her to take music classes at a young age. Akwe says her mother was her inspiration from the start.

But it wasn’t until Akwe met Seo, who is Canadian-Korean, that Les Kingdom was formed. “The whole idea of Nick being Asian and me Black, we’re all part of kingdoms, whether continents or culture,” she says. “I created Les Kingdoms to glorify who we are on earth and to give us a place. We’re part of something and it’s something special.”

Right here in the city’s midtown, Akwe is carving out her own kingdom, playing music in a space so frequently filled with the noise of construction and commuters. Her sound is a mix of soul and modern influence, from pop to folk and rock. “I moved around so much growing up and always was surrounded by many cultures,” she says. “I always try to give everyone something they can relate to.”

While she performs elsewhere in the city, Akwe is always drawn back to Yonge and Eglinton’s multicultural population. She says there are many people who genuinely love to take a seat by her side while she sings. “At the square, I feel it’s where all the souls meet,” she says.

In the summer of 2015, Akwe faced hardship when her mother was diagnosed with Alzheimer’s. The first time she learned about it, Akwe was in the kitchen cooking a meal and her mom was in the living room. “Something told me to peek over,” Akwe says, “and when I did, she was gone.” Her mom wandered out of their home at St. Clair and police discovered her days later 45 minutes outside of the city.

Her mom is under 24-hour care, but the pair still listens to music together. “She’s still young, but her mind gave up on her,” says Akwe. “She could be very serious, very quiet, but then you play music for her, and she’ll close her eyes and just start dancing. She’s there, and she’s in that moment.” Her mother’s favourite song, Édith Piaf’s “La foule,” will often bring the pair together. “When she’s in that place, it’s magic and I want to be there, too,” she says. It’s inspiration for Akwe to connect with her own audience.

Much like the Yonge and Eglinton area itself, Akwe’s identity and sound are still growing. Even though she is one of few artists in the neighbourhood, Akwe plans to stay put with Seo; the pair hopes to nurture the midtown arts scene as they finish production on their first album.

In making her music, Akwe’s not just infusing the cityscape with sound— she’s making it a welcome hotspot for tired feet to sit, relax, and enjoy the show. Hers is an accessible magic, where regular fans will come back with coffee and muffins for Akwe and take a seat by her side. There, everyone is illuminated by those same square lights; everyone is in their own small kingdom.