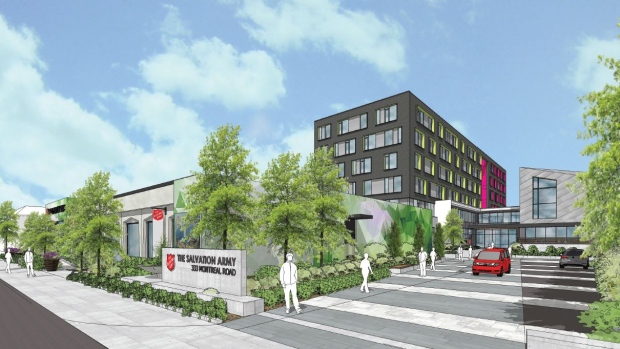 A rendering of the proposed shelter. Photo courtesy of the Salvation Army.

The Salvation Army is proposing an 892-square-metre “mega-shelter” in Ottawa’s Vanier neighbourhood that would provide temporary shelter beds for up to 350 people. The shelter would be the biggest in North America, featuring a special health care unit, a space for addictions recovery, permanent housing referrals, a dining facility, counselling, employment skills training, and more. The Salvation Army says the plan is an innovative and ambitious way to provide a safe space for Ottawa’s homeless. But housing advocates are skeptical.

THE LOGISTICS
It’ll cost the taxpayers of Ottawa $50 million and the city will have to rezone the property in question before any construction can begin. Currently, the space is zoned for residential and “traditional mainstreet”—a pedestrian-friendly strip of shops, restaurants, and services. But the Salvation Army is seeking an exemption, arguing that the shelter is only a small element of the facility.

THE STATE OF HOMELESSNESS IN OTTAWA
An estimated 7,200 people in Ottawa are homeless and/or living in shelters. Several of the city’s shelters are located in the Byward Market, a popular tourist destination.

THE CITY’S PLANS
The key component of Ottawa’s 10-year housing and homelessness plan, launched in 2014, is to use a housing-first approach to manage homelessness. According to the city’s website, “providing a person who is homeless with housing and the necessary supports to stay housed leads to a better quality of life and is far less costly than staying at an emergency shelter.” By 2024, the city plans to eliminate chronic homelessness and minimize emergency shelter stays to less than 30 days.

A “TREATMENT-FIRST” APPROACH
The Salvation Army’s proposed shelter ignores the city’s anti-poverty strategy. “What it communicates to me is [the Salvation Army] is still anchored in a treatment-first approach,” says Tim Aubry, a housing and homelessness researcher from Ottawa.

Research shows housing-first is twice as effective as treatment-first at helping people get out of homelessness. And with housing-first, “not surprisingly,” says Aubry, “individuals show improvement in functioning and quality of life associated with their exits from homelessness.”

A BAND-AID SOLUTION
San Diego tried a similar approach where charitable organizations ran large emergency shelters, and found it didn’t work. “We saw a nearly 19-percent increase of unsheltered homeless in the county,” wrote Michael McConnell for the San Diego City Beat. “It’s clear this model that focuses funding on the front-end, clogging our system with temporary shelters, has failed to resolve homelessness in our city.”

With evidence and political rhetoric backing housing-first, Aubry is perplexed as to why the city is potentially investing in more shelter beds. “If somebody’s homeless,” he says, “why wouldn’t you start with giving them a home?”