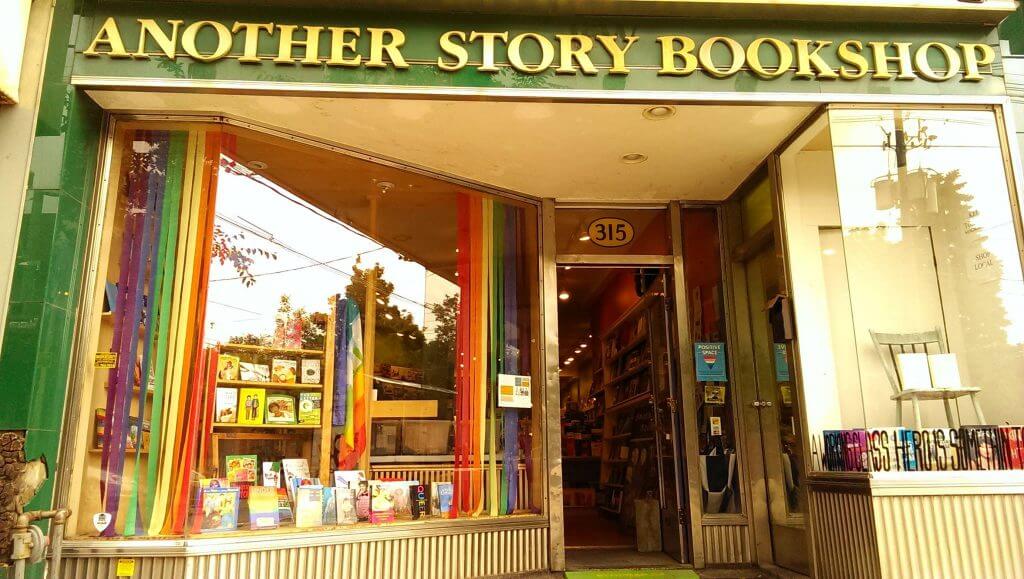 Photo courtesy of Another Story/Facebook.

A chalkboard sits on the sidewalk outside of Another Story, the first sign that this isn’t your typical bookstore. Written on it is a quote from American political activist Angela Davis: You have to act as if it were possible to radically transform the world. And you have to do it all the time. Since 1987, Another Story’s mission as an independent bookstore has been to do just that—carrying titles with themes of social justice, equity, and diversity.

Located in the Roncesvalles neighbourhood in the west end of Toronto, the store has become a staple in the community and beyond, receiving orders from across the country. Another Story’s carefully curated collection is a reflection of owner Sheila Koffman, who died in September after a battle with cancer, and her strong commitment to increasing the representation of different perspectives and ideas through literature.

Independent bookstores like Another Story are much more than a place to buy books. They become a local hub for neighbours to meet and interact, a space to launch indie authors, and where customers and staff are on a first-name basis. But as big-box stores and online giants, such as Amazon, continue to grow, independent shops find it more and more difficult to stay afloat.

This year marks 30 years since Another Story opened. It’s a milestone not just because the store has survived, but because it has thrived and plans to continue what Koffman set out to do three decades ago.

Koffman worked as a civil servant prior to opening Another Story in the late 1980s. Its first location was in a basement on the Danforth in the east end of Toronto. For the next decade and beyond, the shop struggled as one of the few political bookstores at the time. Koffman ordered titles from home, inviting publishers over and forming lasting friendships along the way. The store relied on its wholesale business to keep afloat, eventually establishing strong relationships with teachers, librarians, and school boards across Ontario.

Jeffrey Canton, a former employee, began working at the store during this period and credits Koffman’s foresight and business savvy. She recognized the need to incorporate more diverse books into classrooms early on, before curriculums caught up. “That focus on equity and social justice… and all the various things that she focused on in the store were things that she was doing long before it was part of the real conversation that we have today,” says Canton. “She fought really hard to make sure that her store reflected that.”

It was important to Koffman to champion smaller and independent titles. Another Story held launches, readings, and evenings specifically for teachers, to introduce customers to books they might not have heard of otherwise. The store would end up moving twice more around the same area. In 2006, the store made one last transition to its current space in Toronto’s west end.

In the store, books are organized by theme. The brightly painted orange, green, and purple walls are lined with titles covering topics such as race and gender identity. At the front of the store is a shelf of staff picks—they try to read as many as they can and discuss before ordering. Boxes labelled with the names of various schools are stacked high at the back of the store, soon to be transported across the province.

Anjula Gogia, former co-manager of the Toronto Women’s Bookstore, organizes events for Another Story. This past summer, the store hosted two of its biggest—the Toronto launch of Roxane Gay’s Hunger and Arundhati Roy’s The Ministry of Utmost Happiness. Each event brought out hundreds of attendees. For the store, it was proof that small, independent sellers still have a place among their larger retail competitors. “It’s a chance for people to gather together, to talk about issues, to meet one another, [and] to discuss strategies for change,” says Gogia.

Like many of the store’s staff, co-manager Laura Ash was drawn to Another Story for its commitment to making a social impact through books. For the past few years, the store has been organizing book fairs in schools, bringing alternative titles directly to students. The shop continues to host author events, supporting and advocating for underrepresented writers that might not be carried anywhere else. “All the bookstores that have survived and been around for so long in this city, it’s because they have a community that loves them and they also support that community,” says Ash.

Staff are determined to keep the store moving forward with the knowledge that Koffman’s legacy lives on in Another Story and all that’s on the shelves. “I come in everyday and I still think she’s going to call,” Ash says. “All these books are books that she bought—this is all her.”

Another Story Bookshop’s 30th Anniversary Bash and Tribute to Sheila Koffman will be held on October 21.