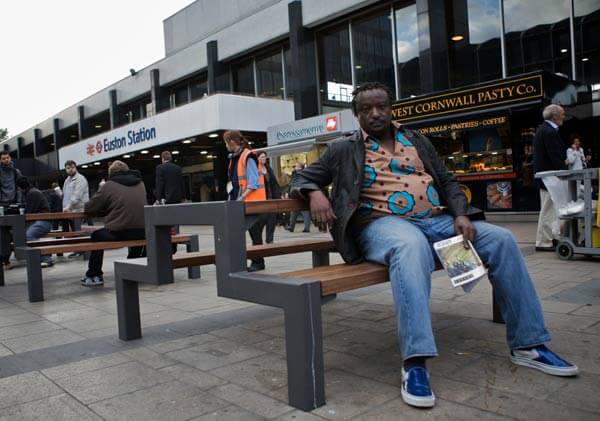 When I attended the Caine Prize in London last week, I was excited to listen to the voices of some of Africa’s top authors. I felt caught up in the growing literature movement: writers like Chimamanda Ngozi Adichie and Binyavanga Wainaina topping international headlines, developing a notable reputation within their countries and abroad.

However, interviewing Binyavanga Wainaina later that week put things into perspective. Wainana is a character: he swears like a sailor, wears colorful printed shirts, and tells me off for using a term like “African literature.” Turning conventional thought on its head, he opens all African writers to a new, more equal, level of international attention.

There is no term like “African literature,” he insists. Instead, one must look at writing by African authors on the same level as one scrutinizes Canadian, American, French or Spanish writers: it’s about the quality of writing, the story being told, not the political identity of each writer or the “Dark Continent” they emerge from.

“[African writers] have been ghettoized. They don’t exist in world literature as other books do because it’s African. We call it African literature, what the fuck is African literature? It’s like you have to be culturally dutiful. Like eating spinach,” says Wainaina.

While reading Kwani?, a Kenyan magazine that publishes primarily African authors, I have been struck by the unfamiliar but alluring construction of certain sentences, the subtlety of characters despite strong colors and adjectives, the pure descriptive power of a few well-chosen words. However, internationally, these writers are not noticed for their literary genius. Instead, they often remain revered for their politicized past, their belonging to “failed states,” to a “Dark Continent.”

Kwani? was Wainaina’s first attempt at reversing this ideology. As former editor and founder, he wanted to publish what excites the Kwani? team, wherever the writing may hve come from. He wanted to push the boundaries by bringing people outside their literary comfort zones. Kwani? is not about Pan-African or African literature, but about a new quality of writing.

“We wanted the aesthetic to present itself, the issues to be framed in their appropriate aesthetic, because fiction itself is a form of intelligence. I really dislike people trying to feel like they need to make the intelligence more political by saying it’s pan-African.”

In line with the continent’s ICT-revolution and the need to turn the current (Western) view of African literature on its head, Wainaina points to the mobile phone.

“Books in mobile phones. You have to realize that this digital phone is like the printing press. For the first time there is a actually a market. You can find a 100,000,000 people who live within Kenya and Nigeria on the same platform like Zain,” he explains, “You can write the most quirky, wacky thing ever and find your initial 30,000 people who will pay 100 shillings to read it.”

The networks that currently exist for publishing African authors exist only outside the continent itself, in the comfort of London or New York, places where people continue to perpetuate an “African literature” rooted in poverty and war.

However, by giving all Africans access to their own writing and publishing tools, the mobile phone offers the chance for people to make their own voices heard within their own communities, countries and continent. Perhaps, through this process, countries like Uganda and Kenya will be able to determine their own writers and stories, creating a literature no longer defined by the tastes of the West.