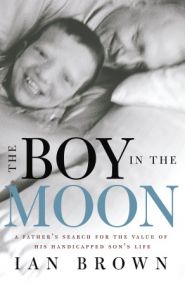 Ian Brown’s The Boy in the Moon had already achieved a mythic status long before it was ever ready for public eyes. It was this insiders’ rumour, the much anticipated, nagging project that was going to blow away everything the Globe and Mail feature writer had ever written previously.  As far back as 2007, the Ryerson Review of Journalism was already calling it, “The book that may change his life.”

Now it’s finally here (about to be released by Random House Canada Sept. 26) and it’s such a personal project for Brown (He has literally been preparing to write it for the 13 years his son has been alive.) that whether it delivers on a literary level (it does) seems like such a futile evaluation.

The issues raised in this book are much greater than that, and while the pathos, humour, unflinching honesty and neurotic eye-for-detail that Brown is known for are all here in spades, he never quite reaches the level of understanding of his son I was hoping for. Worse, he never allows himself a moment to relax, a moment to acknowledge he did the best he could with the circumstances under his control. Like all parents of children with disabilities, he is constantly measuring his son’s life and his own success as a parent by the various measuring sticks of the world, despite all the evidence he finds to the contrary. Brown’s son Walker has Cardiofaciocutaneous Syndrome (CFC) an extremely rare genetic diagnosis with only approximately 100 confirmed cases around the world.  At 13, that means that Walker’s cognitive abilities rest somewhere between 18 months and two years old. He is non-verbal, constantly hits himself, must be fed by G-tube and has seizures on a regular basis. The combination of these symptoms lead to questions about just how sentient he really is and put Brown on a journey to find the value of Walker’s life.

I realize I am both supremely under-qualified and ideally suited to pass judgment on Brown’s conclusions. While I could never imagine  the crippling physical and emotional drain Walker’s 24/7 care puts on his entire family, (Brown and his wife only started getting a full night’s sleep after they made the heart-wrenching decision to send Walker to a group home.) and my disability is nowhere near as severe as what Walker deals with, it seems to me that no matter how “normal” I am compared to Walker, my parents’ evaluation of my life comes down to how close to able-bodied I’ll be.

It takes Brown a long time to get over this notion when he looks at Walker. The family’s sauna is chocked full of occupational therapy toys and Brown admits that each one carries the hope that this will be the toy that snaps Walker out of it, or at least triggers some glint of comprehension within him.  Brown is constantly in pain over what he will never get from his son and what his son will never be. He barely takes the time to realize what he’s gained and when he does recognize it:

“Walker has made me realize that many of the rules we live by are simply made up.”

It’s only a momentary recognition, he is still doing battle with what he has lost. For every magical moment of calm he spends with Walker on his lap or  in the bath, he’s constantly reminding himself that it is only a moment and it will not last. He constantly undercuts his progress in understanding that Walker simply is. He never fully gives himself over to the moment, even though he knows he should. He acknowledges the lessons he has learned from his son without fully living by them.

Walker’s own barometer for success in life is simply love in the moment, time spent with his daddy or a stolen giggle, but Brown constantly puts the weight of the world on his own parental shoulders. In this way though, his job as a parent should be easier than the tasks set out for parents of able-bodied children. He has the capacity to keep Walker endlessly fulfilled just with his compassion and the secret “clicking” language they share. Walker doesn’t care about anything else, so why should he? It makes me sad knowing that many of the regrets Brown has over Walker’s life don’t need to be there. They’re of Brown’s own making.

Brown’s book needs to be read.  It hits on society’s urgent  need to reorganize our priorities and gets down to why “disability” makes us at once so uncomfortable and so at peace. Like any good journalist, he looks for the meaning of Walker’s life from many different points of view. There are those who come from positions of faith, positions of science,  and positions of raising CFC children of their own, but for everything these people tell him, his own skepticsm undercuts his ability to quell his restless mind. He doesn’t allow himself to think in terms of positive possibility without pointing out the the other hand immediately.

I yearned for him to feel better, especially when  the founder of L’Arche, a community where those with developmental disabilities live together with their able-bodied assistants, told him the following:

But for every nugget of wisdom and strategy for finding perspective Jean Vanier gave him,  the conclusion of their talk (possibly because Brown is a committed atheist and resistant to leaps of faith) was the following:

“Look, I wanted to believe it: Every ounce of me knows my odd little boy can teach everyone something about themselves. Whether that will ever happen is another story.”

But just because Brown is still searching for answers doesn’t mean you should throw the baby out with the bath water. His book is like a Rorschach test, everyone who reads it will get something out of it.  These are all issues society is still wrestling with and putting his private self on the line to articulate them should be commended, otherwise they’d remain below the surface — festering until it’s too late.

Ian Brown discusses The Boy in the Moon with his wife Johanna Schneller TONIGHT!