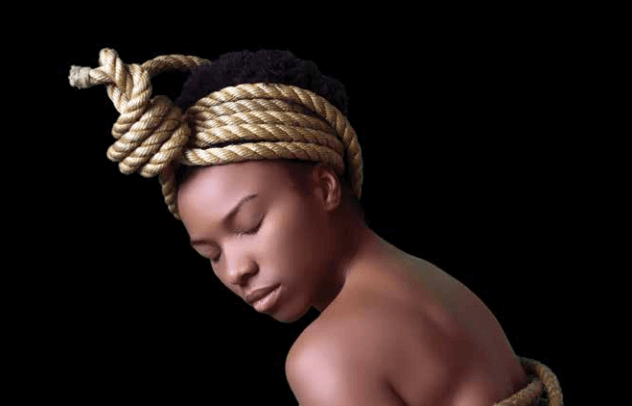 She strolls softly through a deserted modern-day Montreal. Her outfit—and the way she seems to float through the streets—indicate her lack of connection to this modern scene. This is Marie-Josèphe Angélique, a slave “owned” by François Poulin of Montreal in the early 1730s.

Canadian filmmaker Howard J. Davis uses his film C’est Moi as an ethereal glimpse of a person swallowed by history’s tendency to whitewash and provide attention only for those it deems worthy. Though short at its eight-minute run time, C’est Moi provides enough information on Angélique’s story to encourage questioning our preconceived notions of Canada’s history—including its often inherent yet frequently overlooked racial discrimination.

It is rare to see films on a Canadian event that highlight important historical figures of colour. We are used to hearing stories of racial disparity and dissension from our neighbours to the south, but as Davis helpfully reminds us, Canada’s history is far from the clean version that is often portrayed.

Davis takes a symbolic approach to the telling of Angélique’s story. The majority of the film is dedicated to watching her, played by actor Jenny Brizard, glide through Montreal. The film then incorporates a text-based description of her story, where the key points are highlighted by evocative imagery and music. Here is where we learn of the fire Angélique was accused of starting, and the price she had to pay. Davis wanted this project to be a starting point for Canadians to look at the country differently. “We see Canada as a haven away from slavery,” he says. “As Canadians, we go, ‘Oh, no, it didn’t happen up here.’ But it did.” It is not often that stories of residential schools and internment camps get the attention they deserve.

Davis notes that, near where he resides in Niagara-onthe-Lake, houses still stand that once kept slaves. He adds that New France had many slaves, yet we don’t hear about it. The remnants from some of Canada’s most horrific moments are still very much around.

Davis is deeply invested in his subject matter—as a person of mixed race, he has been interested in race-related stories for many years, beginning in his time at Toronto’s Ryerson University. Marginalized stories are often front-of-mind for Davis, with a special interest in stories about female figures as well, stemming from his “desire to tell more stories of people who are subjects of oppression who aren’t at the forefront of our history.”

This push toward uncovering hidden stories can be seen increasingly in the mainstream media, especially in Hollywood films from the past year. Hidden Figures, the historical drama that tells the story of the Black women who were integral in launching John Glenn—the first American astronaut to orbit the Earth—into space, is similar to C’est Moi in this respect. Davis points to some of the other films this year that focus on telling race-centric stories, such as Moonlight, Fences, and Loving. These stories have long been desperate to be told, and Hidden Figures’s success at the box office is proof that there are people ready to see them.

C’est Moi attempts to take an objective look at a snapshot in history, presenting the discovered facts and leaving interpretation up to the audience. With this impartiality, Davis makes clear his goal of uncovering stories and allowing them to speak for themselves, rather than to use his platform to preach.

As for his hopes for this film, Davis only wants for his subject matter to be discovered. Currently, the short film is set to be screened at film festivals in Florida, California, and New Jersey. While he is overjoyed at the American response, Davis hopes some of the many Canadian film festivals will show it as well so that the message of the film can come through to those who are living directly after the generations that actually perpetrated it.

As Canadians, we need to forgo the tendency not to confront the conflict that has happened in our midst because it makes us uncomfortable, and instead face it.

As Davis explains: “The whole point is starting a dialogue and recognizing our accountability to uncover the truth.”