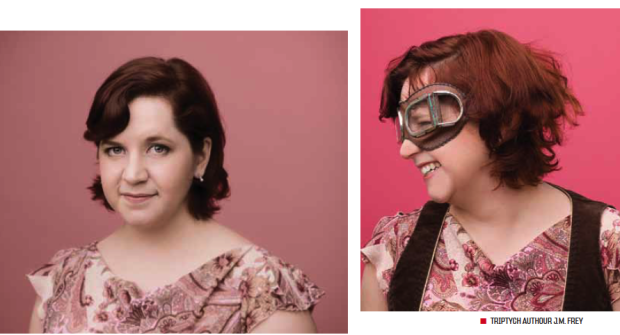 It’s not every day you read a science-fiction novel that features a polyamorous relationship, with one of its partners being a blue-skinned, bat-wing-eared, short- snouted alien, and a plot that involves time travel, a murder mystery and a near-future look at sexuality, bigotry, immigration and gender politics.

Welcome to Triptych, and the science-fiction and fantasy worlds of Toronto author J.M. Frey.

Frey doesn’t write the kind of sci-fi or fantasy you find in Star Wars. She writes the kind of genre fiction we need more of: progressive, representative and accepting, like her critically acclaimed Lambda Literary Award–nominated debut novel Triptych. The novel is a story of acceptance and hope about two humans (Basil and Gwen) who take in a polyamorous alien refugee (Kalp), come to accept Kalp’s way of life, and eventually participate in it to their betterment.

Of course, changing the world happens one person at a time, and Frey discovered sci-fi’s power to do that firsthand when she was eleven year old. When a crush on young actor Wil Wheaton led her to reruns of Star Trek: The Next Generation, Frey found a deep love for Gene Roddenberry’s accepting universe, and a feeling that she was understood. “What I really liked about The Next Generation was that they really explored alternate cultures, societies, and what it means to be different,” she says. “As a kid in rural Ontario who felt really different from everybody else, that really appealed.”

Star Trek’s influence led directly to Frey becoming, as she calls herself, a “professional” geek and a published author. It also left a lasting impression on her work. As someone who continues to feel underrepresented in fiction­—because, as Frey explains, “I walk with a cane, I’m going blind, going deaf, and I’m queer”—much of her playful revisionist and meta stories are propelled by questions of representation: “Where’s the gap? What’s missing? Whose perspective has this story not been told from yet?”

“Women,” is often the answer, and works like her novella The Dark Side of the Glass and the short-story anthology Hero is a Four Letter Word tackle female empowerment and the problematic male attitudes that can be found in sci-fi, fantasy and its fans.

Attitudes Frey’s very familiar with. It’s no accident she uses a gender-neutral pen name. Several years ago when she began seriously pursuing writing, she overheard two men talking in the science-fiction section of a Chapters bookstore. She recounts that “one of them pulled a book out, turned over to the back, read it and said ‘Oh my god, this sounds amazing. Dude, read this! Doesn’t it sound great? I wonder who it’s by… Oh, it’s by a chick. Never mind.’ And he put it back on the shelf.” That was the day she became J.M. Frey.

It’s a testament to Frey’s abilities as a writer that despite the issues she tackles, her writing doesn’t feel political or read like an after-school special. “I try to write books that look like the world I live in. I don’t set out to write issue books.” After a beat, she adds: “But the issues are there because they’re there in real life.”

When asked what she hopes her work will achieve, Frey answers in metaphor. “If you think of a pond and throw a pebble in the pond, it ripples. But then the surface of the pond goes still and you go back to being the person you were when you finished reading the book,” she says. “But that pebble is still there. It’s still at the bottom of the pond. That’s what I want to do. I want to change the world. I want to just drop a lot of pebbles in a lot of ponds.” Gene Roddenberry would be proud.