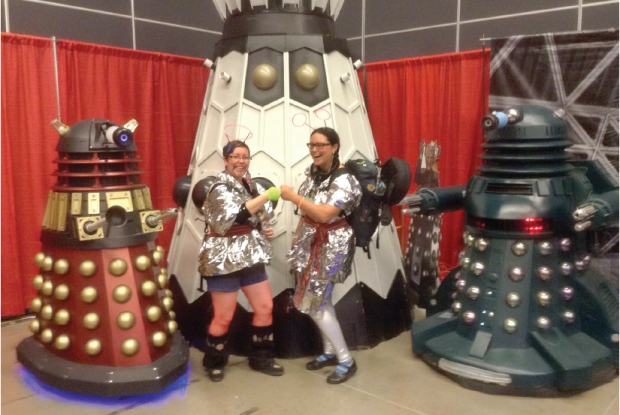 LAST SUMMER, friends Molly Swain and Chelsea Vowel were having a rough time, and looking for an excuse to spend more time together. Swain and Vowel, who are both Métis and live in Montreal, came up with a solution to fix their woes: create a podcast where they could “nerd out,” drink red wine, and talk about science fiction.

Swain and Vowel created Métis in Space, a bi-weekly podcast that reviews and critiques movies and television featuring Indigenous tropes and themes. It took the friends three days to come up with the podcast, record their first episode, and upload it to SoundCloud.

“When Molly and I hang out, we’re hilarious. I thought that the rest of the world should hear that,” says Vowel. “We expected our entire audience to be our moms, and then our moms were not interested.”

Indian and Cowboy, an independent network that creates, produces, and publishes Indigenous media projects across multiple platforms, hosts Métis in Space. Swain says the network is a “fabulous, fabulous idea” in how it allows Indigenous people to build relationships and communicate with each other in new ways.

With episodes gaining thousands of listens on Indian and Cowboy, SoundCloud, and iTunes, Métis in Space frankly, and often hilariously, analyzes shows like Buffy the Vampire Slayer, The X-Files, and Supernatural, picking out common Indigenous representations that surface in mainstream pop culture. Vowel, who has been an avid fan of sci-fi since she was young, says she knew the tropes had always been there.

Recording Métis in Space, however, forces the friends to actively look for stereotypes. They’ve found that in science fiction, Indigenous people are often associated with mystic flutes and drum music, or the ability to turn into an animal.

Métis in Space recognizes that sci-fi creators are predominantly white men, who “explore concepts and anxieties related to colonialism in order to reassure themselves,” Swain says. Vowel adds she can’t “unsee” a pattern in science fiction that is often representative of colonial fears: the storylines often feature Indigenous people and societies who are “wiped out” or about to be erased.

According to the hosts, Métis in Space listeners cite the “Ask a môniyâw (white man)” segment as their favourite part of the podcast, in which Swain and Vowel ask a stereotypical “white man” a question. Vowel’s husband, to his chagrin, participates in the segment by playing the môniyâw. After uploading episodes to SoundCloud, Métis in Space started receiving earnest requests from several men who wanted to be the guest môniyâw.

Métis in Space also actively confronts sci-fi creators. In Episode 5, they recorded a live-report podcast from the 2014 Montreal Comiccon. Knowing that Indigenous people are so often a part of science fiction, Swain and Vowel expected guests at the pop-culture fan convention to have some knowledge of Indigenous history, but they were surprised to find that wasn’t case. On top of that, there were vendors selling products with racist or inaccurate portrayals of Indigenous people.

“They had no consciousness. It was completely divorced from the fact that there are real Indigenous people out there,” Swain says. “It wasn’t only that we were confronting them about their lack of knowledge, but I think to a certain extent, we were almost confronting them with our existence.”

Despite the problems in science fiction, Swain and Vowel are still huge fans of the genre. For the second season, the hosts plan to uncover new ground by exploring what an Indigenous future look like 300 years from now.

“I think science fiction is almost inherently Indigenous because it is so much about world building and future building and telling stories in a way that points to where we want to go, or explores questions of, if this were to happen, how would we deal with it?” Swain says. “We’re going to reclaim ourselves from science fiction in order to create science fiction.”