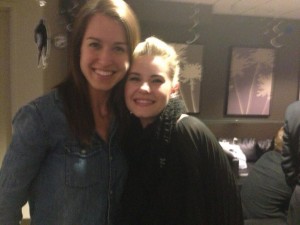 From April Reimer's Twitter: "For those who were thinkin @happyelishas and I were rolling our eyes @ eachother. Was the jerk beside us #rudecomment"

If you didn’t hear, the Toronto Maple Leafs made the playoffs, a first since 2004. The last time they won the Stanley Cup was in 1967. This is all newsworthy stuff, history made with the youngest team in the playoffs.

But it was a look between two women that made the news for days. “DRAMA! Elisha Cuthbert and Leafs Goalie’s wife caught in a serious death stare,” tweets one sports journalist. A CBC web post showed six gifs of the non-verbal exchange, “Or stink eyes, or ‘bitch faces’ or whatever,” it reads (They managed to find three expressions for women looking at each other, but couldn’t get the team name right regarding the goalie). If sports journalists felt the need to cover this, of course Extra TV would chime in, too: “It looked like the making of a catfight.”

The media manufactured hockey wife feud did start out with the aforementioned sport. The Leafs lost to the Boston Bruins in game four, 4 to 3 in overtime. The Bruins scored on Leafs goaltender James Reimer after a bad play by defenceman Dion Phaneuf.

The cameras panned the audience section for the team’s family members’ reactions. April Reimer, married to James, and Elisha Cuthbert, engaged to Phaneuf, looked at each other and did not seem impressed. I’m willing to bet a lot of people watching that game looked unimpressed. But this happened between two women, thus, bitchcraft must have been involved. This “news” was talked about for days—even after the two women clarified the situation (Who asked them anyway?) and said they were reacting to a rude comment made by a nearby fan.

In case you didn’t know: Women can be friends and interact with each other. We don’t actually isolate ourselves until it’s time to fight to the delight of our audience. In response to all the speculation, Cuthbert tweeted, “Things are not always what they seem. I’m insulted and disappointed by a lot of these comments. That’s real. Not a 3 sec. Clip.”

Woman on woman hate is nothing new to television and film, “You don’t, as a woman, get to be in films with too many women,” says Susan Sarandon in an April interview with HuffPost Live. “And if you do, you hardly ever are in scenes together. You’re usually, naturally, pitted against each other.” We see this in The Real Housewives series where female “friends” do nothing more than scream at each other and shit-talk behind closed doors. Or in the modeling industry, like with Naomi Campbell and Tyra Banks, where the media collectively decided two black women can not be successful in modeling at the same time, thus they must hate each other. In American politics we had bitch-labeled Hillary Clinton versus “ditzy” Sarah Palin.

This assumed inherent sexism between women further trivializes our existence. If we are taught from a young age, watching interchangeable Disney princesses fighting likewise evil step-mothers, we will grow to learn that fighting something that’s supposedly silly—like, say, earning less than our male counterparts—is less meaningful than figuring out who is and isn’t a slut. The alienation of friendships between women just means a further dependency on our male counterparts. Things will forever remain imbalanced.

Now, like a commentator said during game six of the Leafs-Bruins series, can we quit talking the lady stare down, and get back to hockey?