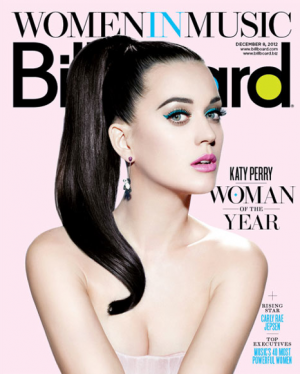 Katy Perry was recently named Billboard’s Woman of the Year, but she’d like you to know that she’s not a feminist.

Billboard tweeted part of the pop singer’s acceptance speech, which goes: “I am not a feminist, but I do believe in the strength of women.”

As you might have guessed, this caused quite an angry stir. How could a woman accepting an award for being, essentially, the best musical woman of 2012, announce to the world that she’s not a feminist?

Perry was criticized a bunch—but she was also defended. An article in Slate said that a lot of women probably choose to abstain from referring to themselves as feminists because “whenever they begin to engage with the material, feminists condescendingly dismiss them as morons, complete with all-caps maniacal laughter.” And indeed, some publications did react that way.

Jezebel, for example, had this to say: “Hi Katy Perry! At its most simple definition, all feminism means is that you think that women should be equal to men, okay? Cool, thanks, byyyyye!” But really, is this reason enough to shy away from women’s issues altogether? Hardly. And, in fact, that same Jezebel article went on to make a fair point: Why would we ever think Perry’s a feminist in the first place? Her music (“I kissed a girl and I liked it”) doesn’t exactly scream, “Women’s rights!”—So why are we reprimanding her for announcing something that we, deep down, already knew?

For me, it’s the fact that Perry chose to tell everyone exactly what she’s not, when she could have just not said it at all. Why did she even bother bringing up that point? She could have simply said that she’s honoured to receive the award because she believes in empowering women—and left it at that. Why did she feel the need to explicitly state that she’s not a feminist? It makes her sound uninformed (queue the condescending jokes) and uninspiring—which, I can only guess (and hope) was unintentional. As Mish Way wrote for Vice, “in this case, it’s far more damaging to say what you aren’t, rather than say nothing at all.”

If Perry really believes in female empowerment, perhaps next time she’ll think twice about separating herself from the very people who stand for just that.