Why don’t people just admit their privilege?! It can get pretty infuriating hearing people of privilege say oppression doesn’t exist, that anyone who says otherwise is too politically correct and/or sensitive. That meritocracy is totally how the world works.

A cartoon by Ronnie Ritchie explains this nicely, with the example of feminism. The heading is, “What they mean when they say they’re not a feminist.” One example shows a white girl saying, “I don’t need feminism. Women aren’t oppressed anymore.” The next panel shows what she means: “I don’t realize how privileged I am that my race/nationality/sexuality/assigned sex/gender identity/size/ability minimizes the effects of the Patriarchy to the point I don’t think it exists.”

It can be easy to deny privilege when it is invisible. We are used to a set of defaults. White people can easily walk through city streets without noticing the sea of white faces on billboards. bell hooks writes about this in her essay, Representing Whiteness in the Black Imagination. She writes that white people are able to think their whiteness is invisible, and that whiteness can exist without knowledge of blackness, while still asserting control. hooks also writes out that white students in her classroom often erupt with rage when their whiteness is looked at, “they believe that all ways of looking that highlight difference subvert the liberal conviction that it is the assertion of universal subjectivity (we are all just people) that will make racism disappear.”

On the same note of default settings and Othering people:

An all-male movie cast is normal, an all-female cast gets an automatic “chick flick” label (or worse, a feminist label!) Western culture is “normal” and everything else is “exotic” and “barbaric.”

It can be hard to realize one’s own privilege, and even harder to accept it. A white person living in poverty, or a male person of colour, for example, still face oppression despite the colour of their skin or performed gender, so how can they be privileged? This is where intersectionality comes into play. Factors like those mentioned in Ritchie’s comic determine certain privileges and oppression. Yes, Patricia Arquette was right when she said sexism needs to be addressed. No, she was not right in alluding that sexism only oppresses white, hetero women.

At risk of showing my keener attitude as a first year undergrad, I’ll link to Peggy McIntosh’s White Privilege: Unpacking the Invisible Knapsack. Starting with, “I was taught to see racism only in individual acts of meanness, not in invisible systems conferring dominance on my group.” She then lists privileges she has a white person, that she may not have noticed before. Privileges like: being able to challenge a situation without being called a credit to her race; knowing her voice will be heard in a group of white people; and knowing her children will learn about their race’s existence in school. These privileges can apply to other privileged and oppressed groups, too.

So, what if you understand that oppression exists, but as a person in a certain place of privilege, you want to be an ally? This can be tricky at times, but there is a solution: shut up and listen. Certainly, stand in solidarity and show your support. But, realize that there are times where those you’re being an ally to do not have the same chances to speak as you, so let them have their chance. This can be hard when you want to show you care or are passionate about equity among people. Remember, in these situations, where you are a member of the dominant group, it isn’t about you. The best thing you can do is listen. That is more important than feel goodism.

But, but, it just doesn’t seem fair! What about men’s day, white history month, a straight pride parade? Well, a straight pride parade is any time a passing heterosexual couple can walk into the store without being harassed. White history is what we are taught right away in school. And since we live in a patriarchy, every day is men’s day. Again, if we are already in the dominant group, we may not notice these things in our lives. And if we are oppressed in other ways, it can be hard to understand that we have any upper hands in life at all. 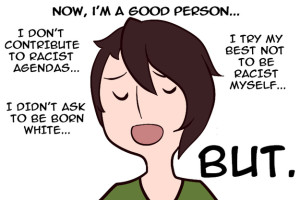 Excerpt from a comic by Jamie Knapp. 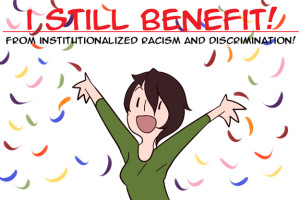 When we do notice our privilege, it can get pretty yucky feeling. This doesn’t mean we get to run from it, we need to face it and deal with all the nastiness so we can properly understand. Recognizing our own privileges doesn’t demonize us; it doesn’t mean we exploit our privilege purposely. It does mean that we benefit from privilege. It is up to us what we do with it and how we can build an equitable world.