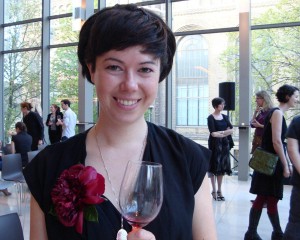 Jen Neale is a 28-year-old Vancouver based writer and winner of the RBC Bronwen Wallace Award for Emerging Writers, for her story “Elk-Headed Man”. This particular literary prize boasts a fine track record of uncovering some of the country’s future literary stars. Past winner Alyssa York presented Neale with $5,000 in Toronto on Wednesday.

Jurors Alexander MacLeod, Johanna Skibsrud and Madeleine Thien say “Elk-Headed Man” has it all: pure imaginative power, sharp humour, emotional honesty and real insight. Throw in a hard-to-resist main character—he’s the strong silent type—and add a few flourishes of raw writerly style and you get a finely crafted story that re-plants the hot seed of Latin American magic realism into the cold heart of the Canadian wilderness.

Jen is a student in the Creative Writing MFA program at UBC, which is also where she completed her undergrad. She has appeared in OCW Magazine and the collection of short fiction Writing Without Direction (Clark-Nova Books). She has worked at PRISM international, as an executive editor (Circulation and Promotion). Originally from St. Catharines, Ont., Jen has lived and written in Vancouver for the past eight years. Her work often features wildlife, nature, and misfortune in some combination or other, and often through the filter of magic realism.

This Magazine: What was your first thought when they announced your name as the winner?

Jen Neale: I’m not sure that I can pinpoint any exact thoughts. It was probably something like, “Was that my name? Oh Lord.” I found out that I was a finalist quite a while ago, and it turns out that I don’t deal well with drawn-out excitement and anticipation. I wasn’t able to form a coherent sentence when they called me up.

This: How does winning the RBC Bronwen Wallace Award for Emerging Writers help a writer like you?

JN: It means so much as a finalist or as a winner. It’s a formal recognition that you stand a chance in the writing world, and it’s amazing to be on the same list as Alissa York, Madeline Thien, and Alison Pick. The Writers’ Trust also treated us incredibly well, and facilitated us meeting important literary folk in Toronto.

This: What are some of the difficulties you faced as an unknown writer?

JN: Getting noticed in the fray. There are so many amazing upcoming writers in Canada. The volume of work that lit journals and contests receive is staggering, so until you’ve lucked into your first few nods, it can be hard to find a home for stories.

This: Do you have any advice for other young authors like yourself to help them get noticed?

JN:The Bronwen Wallace Award is a great place to send work. Also, I try to go to readings whenever possible (as a listener and as a reader). You meet people and support the local lit scene in one fell swoop.

This: What’s next for you?

JN: I’m working on a novel for my MFA thesis, which will include some of the characters from “Elk-Headed Man”. I hope to have it done within the next year or two.