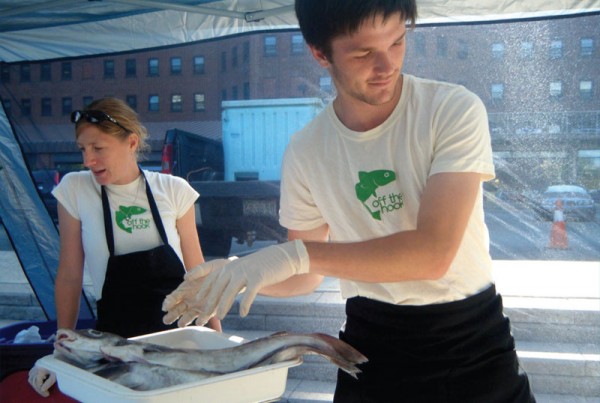 Off the Hook uses the community-supported agriculture model to keep fisheries healthy and bring fresher fish to market. Photo by Sadie Beaton.

It’s hard to find fresh fish to buy in Canada. Even in Halifax, in view of the ocean, it takes at least six days for local fillets to make it from the fishing boats to the supermarket. Now, a group of five fishers are changing the way fish are caught and sold. They’ve founded Off the Hook, an organization they call a community supported fishery, inspired by the local food movement’s community supported agriculture (CSA) plans. As with a CSA, members pay the fishers at the beginning of the season in return for a weekly share of the catch.

This close connection between consumer and fisher is new to Nova Scotia. Ever since colonial times, the Maritime fishing industry has fed the long-distance market. The fisherman relied on the fishing lord, the middle-man, to buy the entire catch. By creating the cooperative and selling directly to the consumer in nearby cities, fishers are reinventing the supply chain. They can also make more money. Whereas the price at the dock for haddock is between 80 cents and a dollar per pound, members of the group buy the fish for $3 a pound, which means they’re helping to keep the fishers on the water.

And because they have a guaranteed market, fishers are able to fish with a bottom hook and line, a method that doesn’t damage ocean habitat—unlike the commercial fishery’s trawlers that drag a large net along the ocean floor, sweeping everything up with it—a technique that contributed substantially to the collapse of the cod fishery.

The fish is good too. As people picked up their fish on one of the final days of the season last fall, they planned dinners of fish tacos and baked fish with herbs. Selling fish that’s just hours out of the water, rather than days, Off the Hook is giving “fast food” a whole new meaning for its members.

Sarah Elton Then: This Magazine intern, 1997, This & That editor, 2000. Now: Author of Locavore: From Farmers’ Fields to Rooftop Gardens, How Canadians Are Changing the Way We Eat, and columnist for CBC’s Here and Now.
Share Tweet Email Print