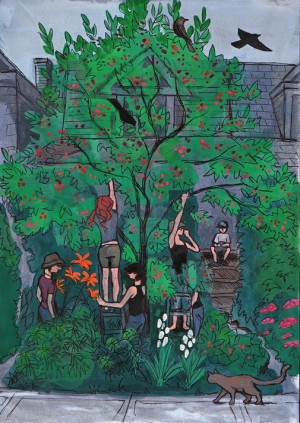 Not Far From the Tree volunteers picking serviceberries in the city. Illustration by Lindsay Campbell.

When it comes to eating locally, it’s tough to beat food that’s growing literally in your own backyard. Since 2008, Not Far From the Tree, a volunteer group in Toronto, has been helping people do just that. Founded by New Brunswicker-turned-Torontonian Laura Reinsborough, the group picked more than 19,000 pounds of fruit from some 200 trees last summer. The bounty was split between the volunteers, the trees’ owners, and local food banks and shelters.

Reinsborough began picking fruit almost by accident in 2007, when she was asked by her local farmers’ market to help harvest the apple trees growing at Spadina Museum, a historic house in downtown Toronto. “I had never been to Spadina Museum, I hadn’t even picked apples before. It was something I had to Google the night before,” she says.

While selling the apples she helped pick, Reinsborough realized that many Torontonians were eager to find help picking fruit growing on their own properties. Fast-forward a year and Not Far From The Tree was born. In the last three years the group has picked everything from apples and pears to gingko nuts and grapes.

This last winter, the group also kicked off Syrup in the City, a program that demonstrates the quintessentially rural tradition of making maple syrup using trees in the city. “People are so excited that this is happening in Toronto,” she says. “It brings attention to an urban ecology, a richness to the city that I don’t think we think about.”