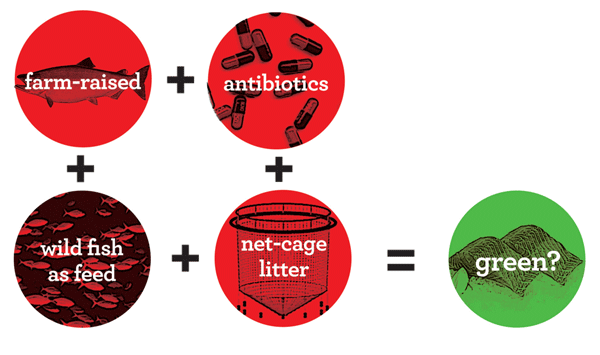 Last June, the governmental Canadian General Standards Board released proposed standards for organic salmon farming. The goal: to overcome trade barriers and help develop niche markets. But will that organic sticker really mean organic-quality farmed fish, or is it just covering up some nasty production practices?

Though the standards board is a federal organization, the new rules were largely produced by a business coalition called the Canadian Organic Aquatic Producers Association and have raised concerns among environmentalists. In a letter to the board published last August, a group of more than 40 leading organic, conservation, and food-safety organizations in Canada and the U.S. argued the draft standards would make certification possible with “minimal changes to current, conventional [farming] practices.”

They have a point. When people think of organic, they usually think that means no pesticides and no antibiotics. Under the proposed standards, salmon farms are allowed to use pesticides routinely, instead of as a last resort (as is stipulated in Canada’s current standards for organic farming on land). Fish can also receive antibiotics and still be called organic.

Just as questionable: the proposed regulations would allow up to 30 percent of feed to be non-organic until proper feed is commercially available. Current regulations for livestock only allow non-organic feed for 10 days following a “catastrophic event.” Farms can also continue to use unlimited amounts of wild fish as feed. Canadian farms produced over 100,000 tonnes of salmon in 2009. According to the non-profit SeaWeb, three pounds or more of wild fish are required to produce one pound of salmon. Do the math and the potential drain on wild stocks seems far from sustainable.

Net-cage farming, which allows waste to litter the ocean (but is much cheaper than sustainable alternatives), is also given a pass. “Consumers expect that organic products are produced in a way that does not require antibiotics, pesticides, or other chemicals, and does not harm the environment,” says Shauna MacKinnon, spokesperson for the Coastal Alliance for Aquaculture Reform, created in 2001 to advocate for a sustainable coast. “Organic aquaculture needs to meet these same principles before it can call itself organic.”