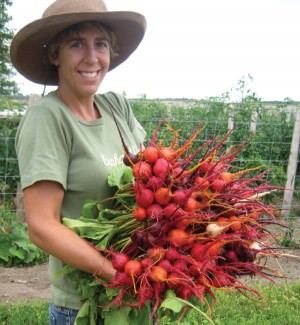 The first time I visited The New Farm, Brent Preston and Gillian Flies’ bucolic 100-acre spread near Creemore, Ontario, the barn was kitted up with twinkle lights. Bundles of hay provided seating for a play and, later, for listening to the foot-stomping tunes of the Sunparlour Players. Professional chefs cooked up a delicious dinner with veggies fresh from the fields, and we hung around a campfire as the stars popped out of the big sky. It was every urbanite’s fantasy of rural life.

Of course, after five years working the land, former city dwellers Preston, Flies, and their two young children don’t have many illusions left about the tough daily reality of organic farming.

“It’s gotten easier as we’ve gotten smarter, but it’s taken longer, been harder work, and cost a lot more than we ever expected,” says Preston with a laugh.

Still, the couple, who met in Malawi and spent nearly a decade working to strengthen democracy movements in Africa, South America, and Indonesia, aren’t going anywhere. In fact, despite the challenges, The New Farm has become a leader in Ontario’s food movement. The family sells over 75 varieties of its heirloom organic veggies at farmers’ markets and to top restaurants—all while advocating for small producers, their rural community (where Preston was recently elected councillor), and engaging young people through farmer training internships.

But the most innovative partnership they’ve forged is with the least likely place: a Toronto food bank and community food centre called The Stop. Still, the fit seemed natural. “We love our customers, but we didn’t get into this to only offer our food to the wealthy,” explains Preston. “And The Stop does more than just hand out food. Like us, they look at the whole food system.”

In fact, The Stop has become The New Farm’s single biggest customer. Farm fundraisers like the one I attended (proceeds go to The Stop, which buys New Farm produce for its many food programs) are the biggest money generator for the partnership. But an entrepreneurial venture called Grow for The Stop—New Farm veggies are sold at independent grocers with 10 percent of proceeds going back to The Stop, which spends the money on more fresh produce—is gaining ground.

It’s a win-win situation. The Stop gets healthy organic veggies for its low-income neighbourhood—where diet-related health problems are rampant—and the New Farm has a ready market for its produce, and its values.

“The potential for collaborations like this is huge,” says Preston. “In fact, we think this holistic approach is the only way to change the food system.”

Andrea Curtis Then: Editor of This Magazine 1997-1999; This board member 1999-2003. Now: Award-winning magazine writer, editor, teacher, and author of the critically acclaimed family memoir Into the Blue, as well as two upcoming books—one for kids, the other adults—on food politics. Her website is andreacurtis.ca.
Share Tweet Email Print