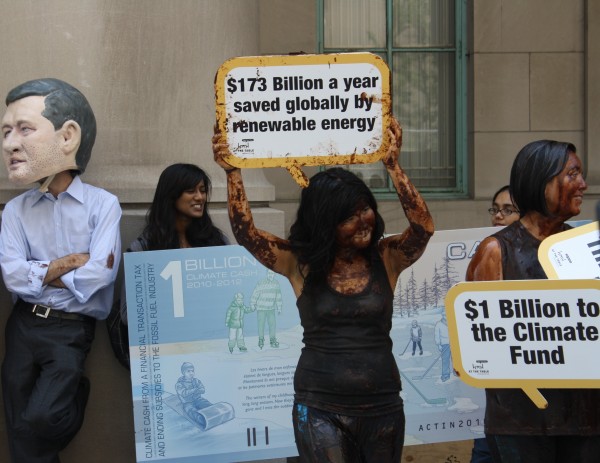 Unless you have been living under a fake rock beside a fake lake, chances are you’ve heard about this G8/G20 business in some way, shape, or form. The reasons why many people are protesting, however, may not be as clear. That’s probably because there isn’t any single issue uniting all protesters. And, despite what you may have heard, there is no one type of person who protests. Not all protesters are communists or socialists, not all are anarchists or against the government, and not all are ‘hapless hippies’, as one recent article stated.

You don’t have to be a feminist to believe that the Harper government’s paltry track record with domestic policies towards women has discredited any maternal health discussion led by our government. You don’t have to be a civil liberties advocate or an anarchist to oppose the spending of 1 billion dollars to turn Toronto into an military zone, complete with barricades, checkpoints and closed circuit security cameras monitoring our every move. And you certainly don’t have to be an environmentalist to doubt the Canadian government’s willingness to combat global warming and to turn a blind, or worse, defiant eye towards the Tar Sands issue.

While outrage over the price tag of the summits is pretty easy to understand, it’s the other issues on the table in front of us today in Canada, in our cities, and throughout the world, which are harder to untangle. It may require a lot of breath, but now is the perfect time to demand firm commitments instead of half measures and excuses on issues such as the environment, Indigenous rights, women’s and queer rights, the end of systematic economic injustice, justice for migrants and non-status people and an end to all wars and occupations. The interconnectedness of these issues shouldn’t be a problem–it should just provide more fuel for your fire.

Here are the reasons why everyone–not just the anarchists, hippies and commies–should give a damn and make yourselves seen, heard and understood in the week before the summits.

1. Gender justice: the Canadian government has pledged 1 billion dollars over 5 years for maternal health initiatives. This number stands in stark contrast with the 1 billion spent on security over the three days of the summit. The sad reality is that any initiative tabled by Harper will be a half-hearted one at best as he has refused to advocate the same rights for the women of the global south–specifically, the right to a safe abortion–as women enjoy in Canada. In addition, our government’s inability (or refusal) to understand the link between the health and status of women, children, the queer community, climate change and the failing global economy further, hinders any potential progress for these already marginalized communities.

2. Creating a just global economy: the road the current G8/G20 leaders in conjunction with the IMF and World Bank are taking us down will simply repeat the economic mistakes of the past. The economic crisis must impel leaders to implement a more sustainable development model worldwide. There are currently roughly 50 million people living below the poverty line–that is less then $1.25 U.S. a day–and this summit must be seen as an opportunity to push for fair economic trade regulations to help those in the global south.

3. Indigenous rights: The policies of the G8 have consistently marginalized indigenous populations around the world facilitating the transfer of wealth and power from the global south to the political elite. Domestically, indigenous populations have been dealing with the effects of globalization and neo-liberal economic policies that have ravaged their land and exploited their communities. Indigenous women and children are hit especially hard by ‘economic reform’ and budget cuts, and some Indigenous communities in Canada do not even have access to clean water.

4. Environmental justice: The summit presents the first opportunity since Copenhagen for world leaders to meet and reevaluate their commitments to reducing carbon emissions and aiding poorer nations in their attempts to adapt to climate change. Canada received the Fossil Award at Copenhagen as the nation that has done the most to impede global action on climate change. The summit must be used as an opportunity for us to ensure that our government knows that its environmental policy will not stand.

5.  Imperialism: The G8 nations are responsible for roughly two-thirds of the world’s military spending. G8 nations are engaged in a self-serving global war on terror that militarizes the world. Domestically, Harper has increased our defense budget in the wake of massive cuts to public services, such as feminist-minded NGOs and arts programs.

These protests cannot be for the select few; they must be the voice of the many. There isn’t one issue that concerns and unites all people–but that’s okay. These issues fall under the same banner of demanding justice and rights from our government, for us and for others throughout the world, and that in and of itself, is quite a mandate.

We are no longer dealing with “Canada the good”; and we can no longer afford to be silent.  So please, give a damn.