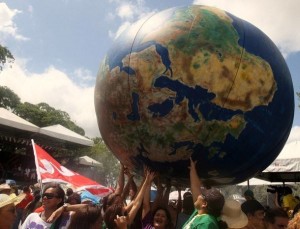 While the prime minister has been trying to do damage control for his G20 agenda, activists and organizers of all stripes have been busy building social justice movements. Sometimes movement-building involves bickering over listservs about who gets to the carry the banner, but sometimes it also involves holding massive, multi-day, multi-issue summits. Left Forum might be over, but there’s plenty more where that came from. Here is a rundown of summits happening this weekend and beyond.

The People’s Summit
June 18-20, Toronto
The People’s Summit is very similar in content to the US Social Forum (see below for details), but slightly different in structure. The People’s Summit is being held as an open, democratic alternative to the G8/G20 Summits taking place in Huntsville and Toronto next week, and has been put together by individuals, unions, student groups, NGOs, community groups, and others. The cost of participating in workshops and events is sliding scale, and there are events for children planned throughout the weekend as well. “Holding Canada Accountable” is going to be a hot topic, in addition to the usual suspects of Environmental Justice and Human Rights, among others. This weekend’s full schedule of musical events, rallies, marches, and panels kicks off tonight with a launch party – “Stories and Solutions from North and South”, featuring Maude Barlowe, Jessica Yee, and others. If you’re in Toronto, put on your combination party hat/thinking cap and head down to the Carlu to pay-what-you-can at 6:30.

Gender Justice Summit
June 18-20, Toronto
Oxfam is hosting the GJS alongside the People’s Summit, with the intention of putting a spotlight on the interrelatedness of women’s rights, climate change, and the economy, as well as fortifying the messages of hope and resistance with walk-the-walk proof that change is possible. Summit participants will “have the opportunity to hear Oxfam’s international program partners from Africa and Latin America discuss their work on the themes of gender based violence, humanitarian response, maternal health, climate change, and food security in plenary discussions, dialogue circles and workshops.” Topics include framing gender equality as a human rights issue and discussing the roles men can take to help achieve gender justice around the world.

Vancouver People’s Summit
June 20, Vancouver
The VPS is partnering with Vancouver’s Car Free Day and is trying to do something different, planning “live music, performance, art, food and a village of civil society groups, activists and independent media, because nothing builds community and strengthens networks better than a massive street party — without cars!” Two smaller summits focusing on women’s rights and climate justice will be held over “mini-eat-ins”, which I hope involves eating tiny vegan cookies and drinking tiny mugs of fair trade coffee. Events are free for all.

Reel Solutions Film Fest
June 21-24, Toronto
Ok so it’s not a summit. That doesn’t mean this scrappy four-day film fest being held at the Toronto Underground Cinema should be left off of this list. Scheduled to run after the People’s Summit and throughout the Themed Days of Resistance, the Reel Solutions Film Fest features documentaries about opposition to environmental disasters in Canada, Southern resistance to Canadian mining companies, and the hideous and long-ranging consequences of war. Heavy content, maybe, but your head and your heart will thank you later. 20$ will get you a series pass, and individual screenings are 8$, but no one will be turned away for lack of funds.

The purpose of the USSF is to effectively and affirmatively articulate the  values and strategies of a growing and vibrant movement for justice in the  United States. Those who build towards and participate in the USSF are no  longer interested in simply stating what social justice movements  “stand-against,” rather we see ourselves as part of new movements that reach  beyond national borders, that practice democracy at all levels, and understand  that neo-liberalism abroad and here in the US is not the solution.

Their ABC slogan (ABC stands for Assemblies, Brigades, and Caravans) brings an interesting element to the forum, stressing continued participation in the community after the forum, as well as encouraging a sprightly, bike-buoyed disbursement of ideas throughout the country in the days and weeks following.
Registration, which costs between 10$ and 100$ depending on one’s income, grants access to workshops, plenary discussions, and screenings. The forum focuses on tying local Detroit issues to those affecting the rest of the US. Detroit has been hit especially hard during the economic crisis, and many of the problems faced in other US cities are amplified there. That also means there is lots of room for positive change. Detroit isn’t too far away, so jump on your bike/car/train/bus so you’ll get there in time to learn about the ABCs of resistance.

The Children’s Social Forum
June 22-26, Detroit
Running alongside the USSF is the Children’s Social Forum, which includes teaching kids about unions, street theatre, and making connections between issues that affect them at home and issues that affect people throughout the world. Kids these days, getting their own forums! Here’s hoping that the lessons taught at the CSF lead to the creation of dozens of mini-Naomi Kleins armed with sharp pencils and crayons.