Have you been stuck inside working all week? Don’t worry, you haven’t missed much—just the largest and most disruptive set of mobilizations Toronto has seen in quite some time. The Toronto Community Mobilization Network spent six months coordinating with various groups to create Themed Days of Action, which took place between June 21 and June 24. Here’s a rundown for those of you who may have missed the events.

Monday‘s events were focused on Migrant Justice and Economic Justice, but the message that came out of the day was a mixed bag. A rally at Allen Gardens featured United Food and Commercial Workers (UFCW) and anti-poverty activists speaking on behalf of workers affected by G8/G20 policies in the global south. They also spoke about the failure of all levels of government in Canada to provide meaningful support to low-income people during the current economic crisis. 50-100 demonstrators made their way along Dundas, where an Esso station was briefly occupied to show disdain for government bailouts (Esso was one of the 70 corporations that received money from the US government). The march progressed up Yonge Street and ended at  Children’s Aid Society headquarters to emphasize that the well-being of children is being threatened by all levels of government in Canada, due to unfriendly policies and funding structures for women’s organizations and organizations that deal with maternal health.

Things got steamy on Tuesday when the crushing humidity and the political sexiness of the Gender and Queer Justice march collided at Queen and Yonge. A crowd of 100-200 people took up all lanes on Queen street and stopped at various points to engage in a kiss-in, a declaration from lesbian bankers about Pride funding, and a little bit of good old fashioned street theatre—”Harper Don’t Preach,” sung and danced to Madonna’s “Papa Don’t Preach.” Even Perez Hilton took note.

The atmosphere on Wednesday morning was tense, but resistance was fertile. The unusual 5.0 earthquake literally underscored the theme of Environmental and Climate Justice. Groups including the Council of Canadians, the Rainforest Action Network (RAN) and the Canadian Youth Climate Coalition (CYCC) led a toxic tour of the city. 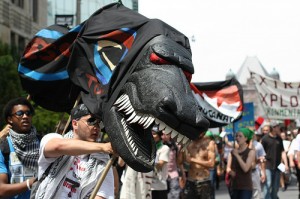 300-400 people marched with the tour, which was filled with floats, rebel clowns, smiling banner-toters, and others who simply got swept into the crowd as it progressed throughout the city. The crowd stopped first at a Royal Bank branch, where speakers noted that RBC is the biggest funder of the poisonous and destructive Tar Sands project.

The route continued along until the tour arrived at the doorstep of the U of T mining building, which had recently been given a gift from Gold Corp, the second-largest gold producing company in the world. Gold Corp routinely engages in mining operations that create environmental destruction and human rights abuses—in fact, they were just told by Guatemala to stop operating the Marlin mine because of such issues. Speakers from communities affected by mining companies took a moment to call out the corporation and the government of Canada, which has little or no regulations in place to prevent Canadian companies from causing such damage.

The toxic tour ended in front of the courthouse at University and Armory, where progressive lawyers spoke about suits brought against the TSX and the Copper Mesa mining company by three Ecuadorean villagers. 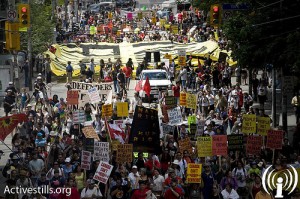 Thursday saw the biggest turnout yet. Indigenous Sovereignty was the theme of the day, and groups from across the country converged in the city to bring a firm message to the leaders of the G20. Two thousand people marched in the event, which was planned by Defenders of the Land, to protest Canada’s record on the treatment of Indigenous people. One purpose of the march was to call attention to Canada’s refusal to sign on to the United Nations Declaration on the Rights of Indigenous Peoples.

Today, the Themed Days of Resistance  have ended, and the days of action have begun. A rally and march held by several groups including Ontario Coalition Against Poverty and No One Is Illegal started at 2:30 pm at Allen Gardens. “Justice for Our Communities” is the concept, and the march will culminate in a tent city and night-long party. More to come over the weekend!