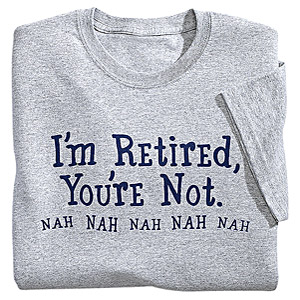 The notion that a failure to plan is nothing more than a plan to fail is one of the more heavily trafficked pieces of common sense, but it appears that the baby boomers are exempt from its wisdom. Instead, it will be their children who will be forced to cover the costs associated with their failure to prepare for retirement.

At least, that was the message that emerged from December’s “pension summit” in Whitehorse, where finance ministers and senior government officials from across Canada met to formulate a response to the failure of Canada’s baby boomers to adequately prepare for their own retirement. A turbulent decade in the equity markets, a marked decline in the number of private-sector pension plans, and an unwillingness or inability on boomers’ part to save enough means many members of Canada’s biggest generation face retirement years that may not exactly be golden. But while there are ideological and political differences of opinion on how this apparent crisis ought to be addressed, one thing was clear: the en masse retirement of the boomers presents a huge challenge that is still going untended.

Right now, Canada has one of the more generous government benefit plans in the world, with the combined income from the Canada Pension Plan, Old Age Security, and the Guaranteed Income Supplement totalling as much as $36,000 per couple, or $19,000 per person as of 2009. Improving the lot of Canada’s retirees is a worthy goal, and the question of retirement income deserves closer study given the virtual disappearance of defined benefit pension plans in the private sector and the sorry fact that bankrupt companies’ pension recipients are among the last to be paid when creditors come to collect—as ex-employees of Nortel recently learned.

But there is something wrong if improving today’s pensions means saddling tomorrow’s workers with the bill—a very real possibility when it comes to pension reform. One of the most popular solutions floated in Whitehorse was a significant increase in contributions to the Canada Pension Plan in order to pay for the imminent bulge of retirees. One scenario would see employee contributions rise from 4.95 percent to eight percent, a 60 percent increase (and a 300 percent increase from the rates the boomers themselves paid for much of their working lives).

Harry Satanove, an actuary and pension advisor, worries that placing the burden of pension reform on young Canadians, many of whom are saddled with monstrous levels of student debt and all of whom suffer disproportionately from the consequences of a stiffening job market, is unfair. “We shouldn’t be relying on our kids and grandkids to pay for our pensions,” he said in a December 11, 2009, article on pension reform published in the Tyee. “There’s not enough of them to support all of us.” Unfortunately, that appears to be precisely the plan, and not just when it comes to pension reform, either. The federal and provincial governments failed to anticipate the crunch, and the shortfall will have to be covered by the next generation of taxpayers. Thanks to a declining birth rate, the number of elderly Canadians has been on the rise for some time and that figure will peak in the next 30 years as the “dependency ratio”—the number of workers for every non-working adult—falls from five-to-one today to twoto-one by 2040. One study from early 2009 estimated that pension, health care, and other senior-related programs will cost $1.5 trillion over the next 50 years. Rising costs and falling revenues—partly owing to new debt from 2009’s stimulus spending—are a toxic combination. Yet there has been no national conversation of any significance, no meeting of provincial and federal ministers, and no sense of urgency about how Canada will fund this massive liability.

In view of these facts, the recent panic over the state of Canada’s retirement infrastructure establishes a worrying precedent. Those speaking on behalf of Canada’s baby boomers prefer to frame the retirement issue as an effort to improve the post-work prospects for all future generations, but the timing of its arrival on the national stage betrays that elegant smokescreen: It is no coincidence that retirement-related issues suddenly became a pressing national concern as the first baby boomers began to collect retirement benefits—just as it won’t be when health care, assisted suicide, and other senior-related issues become pressing concerns in their own time.

That’s not to attribute malicious motives to the boomers, but instead to acknowledge their demographic dominance simply overwhelms the agendas of other constituencies. Federal and provincial politicians have reacted to the concerns of Canada’s largest generation with a degree of responsiveness unheard of on files like student debt or the environment. And it isn’t surprising that the boomers have the ear of policy-makers, given both their numbers and their relative enthusiasm for voting. But privileging the interests of one demographic over those of another is a recipe for conflict. Younger Canadians can only hope that the politics of the next 40 years isn’t defined by it.