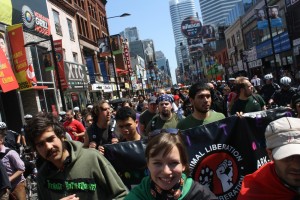 Protestors march down Toronto's Yonge Street as part of anti-G20 All Out In Defense of Rights Rally, Monday June 21 2010. Photo by Jesse Mintz.

The Toronto Community Mobilization Network kicked off its themed days of resistance to the G20 on Monday with activists converging around a mixed bag of issues including income equity, community control over resources, migrant justice, and an end to war and occupation. It’s an ambitious start­ for the week-long campaigns. On their own, each issue is complex. So wouldn’t combining them create one massively hopeless problem? Not necessarily.

Uniting the struggles sends a clear message:  justice for one means justice for all. Organizing in solidarity weaves together the various conditions of oppression and injustice affecting populations around the world. It gives us a deeper understanding of these conditions, and how to act against them.

In effect, you can’t talk about income equity without addressing migrant justice. The fact is, so-called developed states have built their economies on the labour of underpaid and overworked “temporary” migrant labourers. A recent Stats Can report suggests that throughout the 31 countries that make up the Organization for Economic Co-operation and Development (compare these to the countries that have ratified or signed the UN Convention on the Protection of the Rights of All Migrant Workers and Their Families, or to the G20 roster for that matter), the “temporary migration of foreign workers has increased by 4 percent to 5 percent per year since 2000.”

The same report states that over 94,000 non-permanent residents worked in Canada full time (30 hours per week or more) in 2006. Many came to this country as part of temporary foreign worker programs, such as the Live-in Caregiver Program or the Seasonal Agricultural Workers Program. Activists, academics, journalists, filmmakers, politicians—pretty much everyone—have denounced the current state of both programs for their exploitative policies, racist legacies and harmful social effects. And it only seems to be getting worse for migrant workers as third-party recruiters become increasingly popular.

The fact that business is booming for recruiters means there’s a pool of people willing to put up whatever money they have for the promise of work abroad.  And here’s where we connect the dots from migrant justice to ending war and occupation and restoring control of resources to the people—what has compelled, and continues to compel, the estimated 214 million migrants of the world to leave their home countries in the first place? That’s what migrant justice group No One Is Illegal wants us to think about:

Government and public discourse fails to address root causes of forced migration. On the one hand, because of free trade policies—including Canadian free trade agreements—and structural adjustment programs, governments throughout the global South have been forced to adopt neoliberal policies that have restructured and privatized their land and services, resulting in the displacement of urban and rural workers and farmers. On the other hand, capital mobility has led corporations to create millions of low-wage jobs and to seek vulnerable workers to fill them, both in sweatshops in the global South and exploitable labour sectors in the global North.

Sure, not all migrant workers are explicitly forced to come to Canada as a labourer, as one analyst with the Fraser Institute griped in an interview with The Dominion, but then again lots of people are. Forced migrants are refugees, asylum seekers, internally displaced and trafficked people, as well as survivors of developmental displacement, environmental and manufactured disasters.

Huge construction projects like dams, roads and airports squeeze people out of their homes. Stephen Castles, the former Director of the Refugee Studies Centre at Oxford University, writes that many of these initiatives are funded by the World Bank and displace as many as 10 million people annually. Though World Bank offers compensation for resettlement, Castles concludes:

Millions of development displacees experience permanent impoverishment, and end up in a situation of social and political marginalization.

That’s why war and conflict, immigration and refugee flows, jobs and wages, and global economics are, together, a “focus” of protest. Far from being separate and unrelated problems, they’re inextricably entangled. And the solutions will be too.