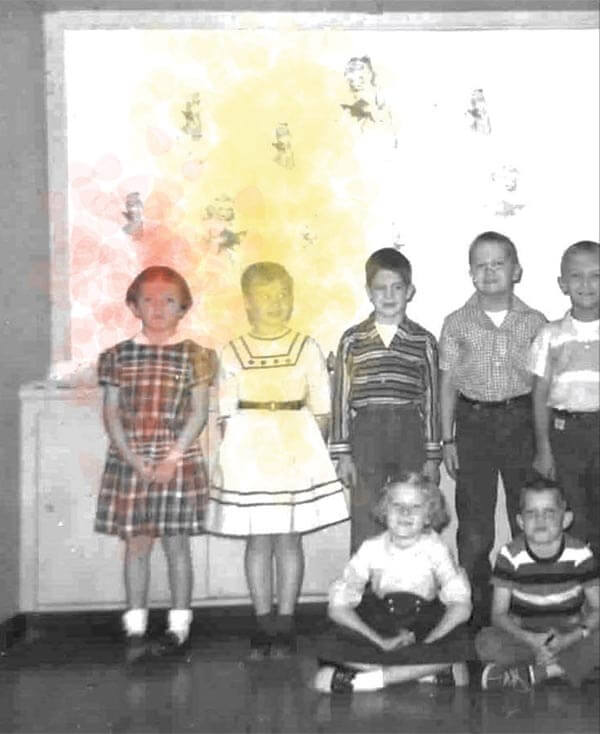 I haven’t been to a party before where they served pie, have you? But I guess that’s a silly question because of course you’d know the hosts, so you’ve probably— Anyway, it’s very good pie. It takes creative people to come up with a snack idea like that.

I said to Appollonia—that’s who I came with—“Would you have thought of giving out pie?” And she said, “Nope.” But of course Appollonia is not creative like you and me. Which she wouldn’t mind me saying, by the way. We all have our strengths and weaknesses.

Now me, I’ve got my chapbook. But put an equation in front of me and do you think I’d know how to solve it? Give me a break! I am a words person whereas Appollonia is a numbers person, which is a skill so many of us writers and publishers haven’t mastered. On the other hand, Appollonia is not a big reader. She has a subscription to Chatelaine, if that tells you anything. She also watches a lot of television. Let’s just say she has her shows.

By saying that, I am not saying Appollonia is a bad person. Far from it. She is kind, and holds a special place in her heart for society’s cast-offs. There are just some things she doesn’t understand—will never understand—because she is Appollonia, and she is a different person from you and me. A good person, certainly. But a different person. Let’s just say she is mainstream, and leave it at that. I mean, she’s one of my good friends, and I know her and she would not think the label “mainstream” was a negative thing.

Do you remember earlier, when “Panama” came on? She said to me, “Who sings this, again?” And I said, “It doesn’t matter, Appollonia—they’re playing it ironically.” But she started bopping her head to it anyway. That’s just the way she is. And she says the funniest things! What was it she said the other day—she’s no poet but she just comes out with the greatest turns of phrase. Oh, I remember. She was talking about her work—she works in an office, as in permanently—and she was explaining how she’d stood up to her boss about switching the complimentary coffee milk from two percent to one percent. Now, I’m sorry, but if you’re putting it in your coffee, you cannot tell the difference between one percent and two percent, it’s impossible. If you’re drinking the milk on its own, then maybe. But otherwise not in a million years. And these people were up in arms about it! So they had a meeting and Appollonia called for a vote for two percent, which she knew was the consensus, but none of her co-workers backed her up so it was just her against the boss. And do you know what she said to me at the end of her anecdote? She said, “They hung me out to frigging hang myself.” Isn’t that wonderful?

I asked her once for permission to write a poem about her work life. Because it is so unpoetic, there’s actually an irony at work there—ha!—that’s worth writing about. And Appollonia said to me, “Sure, what the hell. Immortalize me.” Isn’t that perfect? The things she comes out with.

Between you and me? Appollonia has lived a terrible life.

Her parents were gypsies, which is bad enough, but while at least most gypsies are known for their flair for performance, Appollonia’s gypsy parents were bookkeepers. And I’m not talking librarians, which would’ve been something, right? So, you know, they moved around a lot. Up until she started kindergarten, Appollonia was uprooted I can’t even tell you how many times. Over and over again, suffice it to say.

But she is not a complainer. Never has been. I met her in Grade 1, we were in the same class, and the other kids would throw blocks at her and she wouldn’t say boo. That’s what first intrigued me about her, actually. She also has that voice—you must know her voice, where it always sounds like she’s about to burst into tears, like “Huhhh, huhhh, huhhhn,” all the time, but she’s not, it’s just the way she sounds.

So we became friends. I’d make up the games and she’d just go along with whatever. And I would tell her stories on our walks home from school—I was a storyteller even then. Appollonia of course enjoyed being entertained. Our friendship grew and grew. Then we lost touch for about 20 years. She went her way and I went mine, and isn’t that the way it goes, though, so often. With friends.

I bet you can guess how we found each other again! The thing of it is, I only really got on there in the first place to promote my chapbook. You must do that with your press too, I’m sure. Anyway, do you know what Appollonia said, when she got in touch with me? She said, “This Internet thing is the wave of the future!” I know. Adorable.

The funny thing was, I didn’t remember her at first. Her name rang a bell, but it was such a long time ago. So I looked through her friends list to see if I recognized anyone, and of course I saw you, and so many of the other guests here, and I thought, What a small, small world we live in.

Soon after that we met up for lunch and got reacquainted. I took her to that place, what’s that place called. You know, the restaurant that’s loud, with the salad they make from things that fall out of trees? Anyway, that’s where we went. And it all came rushing back to us. Grade school. Playing. Our story-time walks. And I told Appollonia about my chapbook and she said—if you can believe it—“What’s a chapbook?” Oh dear. So I explained it to her, and she was thrilled for me and asked me could she buy it in the bookstores, and I said no, she could only buy it directly from me. Poor thing, she has no idea how it all works.

She doesn’t know anything about the “scene,” either, but I guess why would she? Just because she knows all these people through— How does she know all these people? She’s really kept that to herself. Although she’s never even heard of [email protected], which is amazing to me. To be that out of touch with what’s going on in the world. You put out his last flipbook, didn’t you? She said to me, “Well, what does he do?” And I said, “He engages with the absence of sound. He communicates his poetry through gestures and facial expressions.” And she said—now, you’ll get a real kick out of this—“Isn’t that what a mime clown does?” I said to her, “Appollonia, [email protected] is not a mime clown. He is a soundless poet.” She really doesn’t have a clue. I mean, I’ve never seen one of his performances, but at least I know. You know?

Appollonia is an accountant now, and she’s married to a man named Bob who’s in one of the trades, I can’t remember which, and they’ve talked about children and they just bought a condo, but not a loft condo, it’s one of those postage-stamp cookie-cutter high-rise ones, which she is going to have a very hard time selling, but still, it’s property and you’ve got to believe that owning any property in the city is an achievement these days. I said that to her too, and she said, “Do you really think it’ll be hard to sell?” I said, “Appollonia, none of us has a crystal ball.” Well, maybe some of us do. Appollonia’s parents might! But anyway, I said she should be proud of her accomplishments.

And she’s going to be a mother someday! Which is the last thing I’d want to be, but who am I to judge? The second-last thing I’d want to be is a homeowner. The Appollonias of the world are welcome to it. I explained to her that renting is the way to go if you’re an artist, and I told her, “Appollonia, you are so lucky you’re not a creative person. You are so free!” And do you know what she said to me? She said, “Well yeah, it’s true, I guess I am pretty lucky that way. None of those pesky thought bubbles overhead to weigh down my empty noggin!” I’m telling you, she says things like that all the time! It’s hilarious. But of course also very sad.

The thing about me is, I think about other people. Other people are always at the forefront of my mind. And I worry about Appollonia, I really do. She’s a bit of a loner, so she’s not the best with crowds, which is why I said I’d come with her tonight and keep her company. Okay, I’ll come clean and admit that there are people at this party who I would like to meet, of course there’s that. But really I am here for Appollonia.

I wasn’t even going to come over here but Appollonia said I should. One of her favourite sayings is, “Why not go out on a limb, because that’s where the fruit is.” Priceless, I know. That’s what she said to me earlier, when I happened to mention that it might be nice to talk to you about my chapbook and about poetry in general. So here I am.

You know, I’m so glad I met you, you’re so easy to talk with. And you’re enjoying the pie too, I see! Oh, I’m sorry. Strudel. And here I thought it was pie all this time. Now isn’t that funny, because I’m normally very observant. I can even show you right here in my chapbook, it has all these observations I make every day, transformed into verse. I’ve got this acrostic series on yearning, let me just find that page… You do? No, no, of course, I know how it goes. You’ve got people you need to—sure. It’s a party! I really should be getting back to Appollonia, anyway, she’s starting to look pretty lonely over there. You mean that’s where you were— Well, perfect, the three of us, then! Oh. Really? No, sure, I understand completely, I don’t mind at all. I was just on my way to the bathroom, anyway. Where is the bathroom, do you know? Of course you’d know. Could you please just point me in the right direction before you— You don’t know? Well, that’s fine. I’ll find my way there eventually.