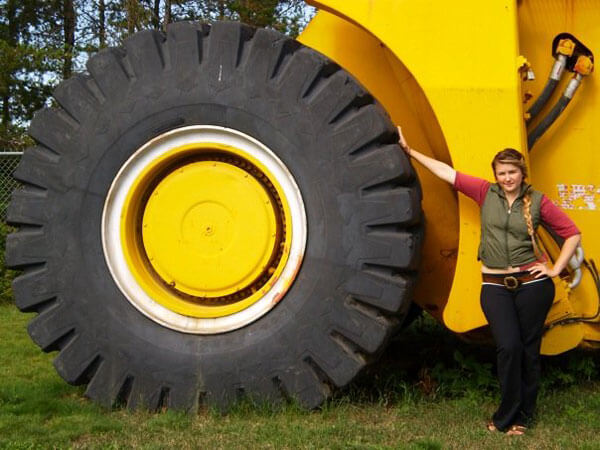 Emily Hunter with one of the huge earth-movers that's instrumental to Alberta Tar Sands development. Watch her documentary tonight on MTV.

Emily Hunter, This Magazine‘s resident environmental blogger, took an MTV Canada documentary crew to Alberta’s Tar Sands over the summer to see the devastation that’s unfolding there for herself. She’s currently working on a feature story for the magazine, but the documentary she made is airing tonight on MTV Canada, at 8:30 PM EST. The show is part of MTV’s new “Impact” series of half-hour special documentaries by young journalists and activists. Tonight, Emily visits Fort Chipewyan, one of the most heavily affected and polluted downstream sites from the epic, landscape-scarring development happening around Fort McMurray. It’s an up-close look at one of the most important public issues in Canada, and is definitely worth checking out.

The doc also has a Facebook group; you can follow Emily Hunter on Twitter for more information about her upcoming projects, with This Magazine and elsewhere.