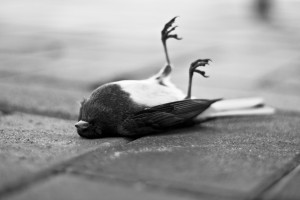 The Alberta tar sands are a famously bad place to be a migratory bird. Turns out it’s even worse than we thought. From the Toronto Star:

A new study says birds are likely dying in oilsands tailings ponds at least 30 times the rate suggested by industry and government. […]

The 14-year median, including raptors, songbirds, shorebirds and gulls, is 1,973 deaths every year. That’s more birds than died in the April 2008 incident that saw Syncrude convicted of charges under the environmental protection legislation earlier this year.

And the total is probably higher than that, said [Dr. Kevin] Timoney. His study, which was funded by Dalhousie University, didn’t account for birds that landed and were oiled at night or that simply sank under the surface of the ponds.

If Dr. Timoney’s name rings a bell, it’s because he’s called out Syncrude and the Alberta government before, including once coming to This Magazine‘s aid when an Alberta government spokesperson tried to pressure us into retracting a blog post about the the tar sands’ true environmental toll. We know which pony we’re backing in this race!