The residents of Fort Chipewyan, Alberta, live downstream from the most destructive industrial project on earth. A portrait of a community in peril 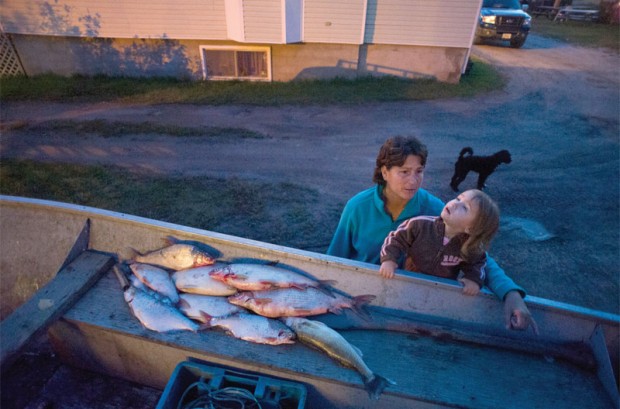 The First Nations community of Fort Chipewyan is located 300 kilometres downstream from the oil sands. In 2006, Fort Chipewyan’s family physician, Dr. John O’Connor, reported that alarmingly high rates of rare and aggressive cancers were killing local residents. As of 2010, band elders reported that cancer had become the leading cause of death in the community. Fear and grief consume Fort Chipewyan as fishermen are finding tumour-laden fish in Lake Athabasca and residents continue to lose their friends and family to cancer.

The Canadian Association of Petroleum Producers continues to tell Canada and the world that there are no lasting impacts upon human health or the environment from the oil sands. Conflicting statements from CAPP, the Government of Alberta, scientists, environmentalists, non-governmental organizations and First Nations people have led to widespread public confusion over the true effects of the operation. Meanwhile, the people of Fort Chipewyan continue to die. Those who survive are afraid to consume the moose, fish and water that have sustained their families for generations. 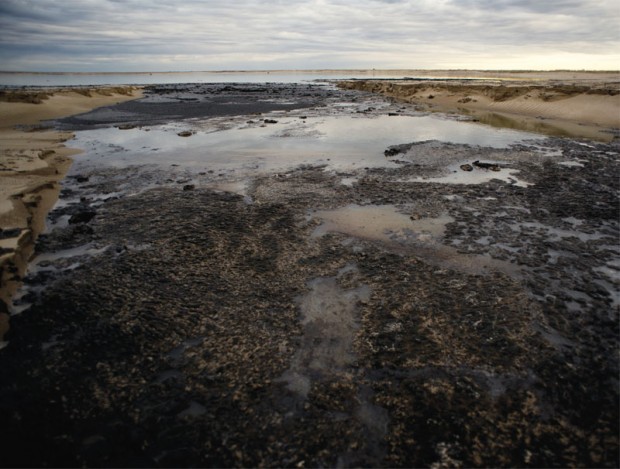 Tailings ponds line both sides of the Athabasca River near the oil sands—their toxic contents held back by man-made sand dikes that are hundreds of feet tall. A 2008 study by Environmental Defence showed that the tailings ponds were leaking 11 million litres of liquid into the surrounding environment every day. The Athabasca River runs past the oil sands, through Lake Athabasca, past several indigenous communities including Fort Chipewyan, and eventually empties into the Arctic Ocean. 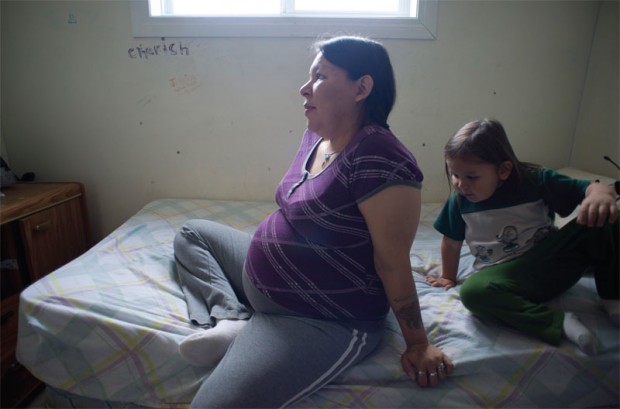 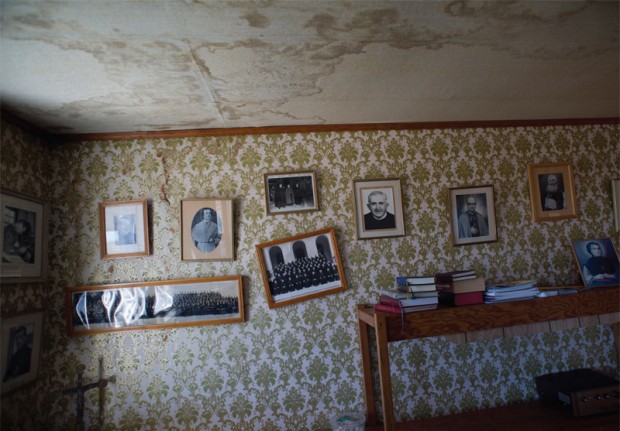 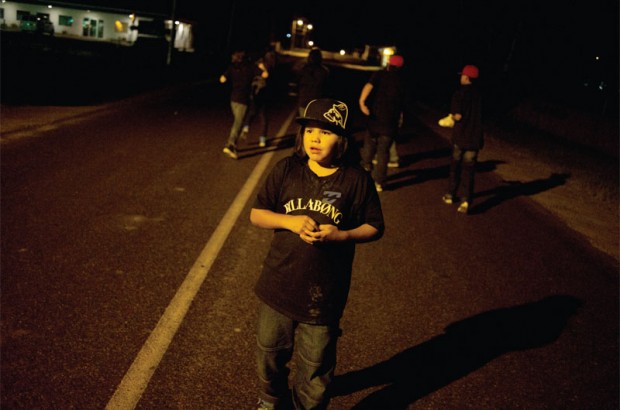 Young people in Fort Chipewyan are increasingly disconnected from their traditional culture.

Like many Fort Chipewyan parents, Cherie Wanderingspirit (above) is worried about her children’s health. Today’s younger generations in Fort Chipewyan not only face the threat of cancer, but also live with the social trauma passed down to them by family members who lived at Fort Chipewyan’s Holy Angels Residential School (above) which closed in 1974. The torture and sexual abuse endured by the aboriginal children who attended the school have left lasting wounds upon the social and cultural fabric of Fort Chipewyan. Substance abuse, sexual assault, depression, and suicide are ongoing problems within the community. As a result, young people here are largely disconnected from their traditional First Nations culture. Rather than leaning to hunt, fish and trap, the youth (above) are often more interested in video games and urban fashion. 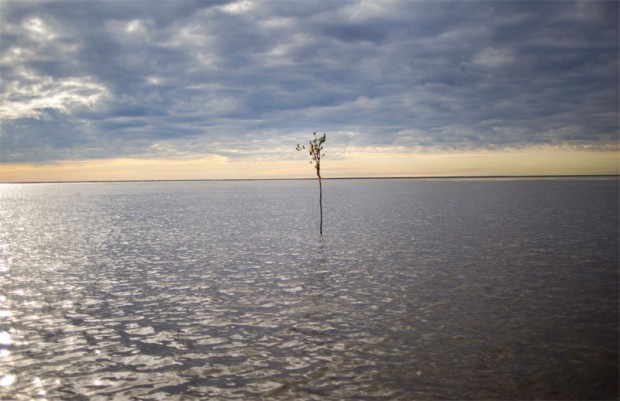 A willow branch marks the passage from Lake Athabasca into the Athabasca Delta. 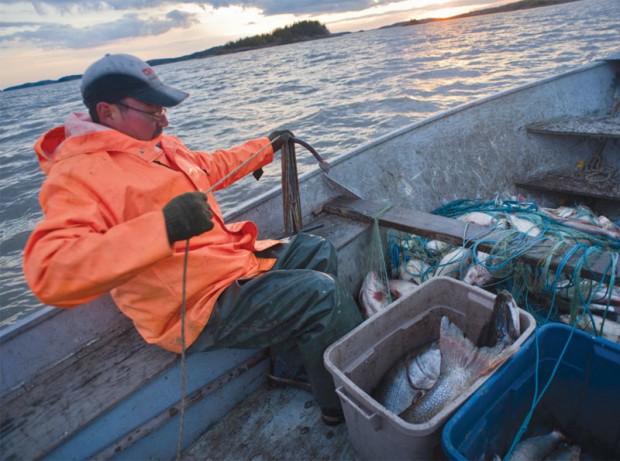 Other than working in the oil sands, commercial fishing is one of the last ways to make a living in Fort Chipewyan. 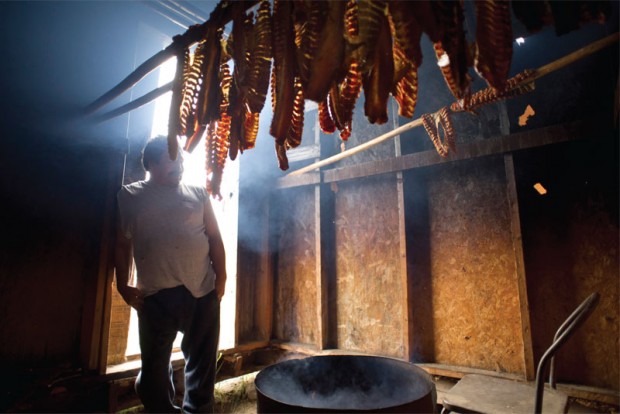 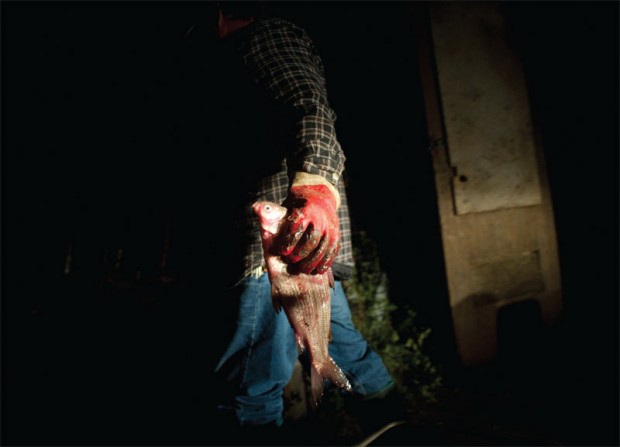 Fish that can't be sold are thrown to the sled dogs.

A young willow branch (above) stuck into the mud by a boater, marks the deepest passage from Lake Athabasca into the Athabasca Delta. Fort Chipewyan’s band elders are concerned that water being taken from the Athabasca River to process bitumen into oil is contributing to declining water levels. Tar sands processing requires almost four barrels of water for every barrel of crude produced; Alberta Energy projects production will reach 3 million barrels of oil per day by 2018. Aside from employment in the oil sands, commercial fishing is one of Fort Chipewyan’s last viable means of making a living. Over the last five years, more and more fish with golf-ball-sized tumours, double tails, and other abnormalities have been caught in Lake Athabasca by commercial fishermen. In 2010, fishermen in Fort Chipewyan were unable to sell any fish commercially due to growing concerns over contamination from pollution, according to Lionel Lepine, the traditional environmental knowledge coordinator for the Athabasca Chipewyan First Nation. Most of the fish caught during 2010 were smoked  or thrown to sled dogs. 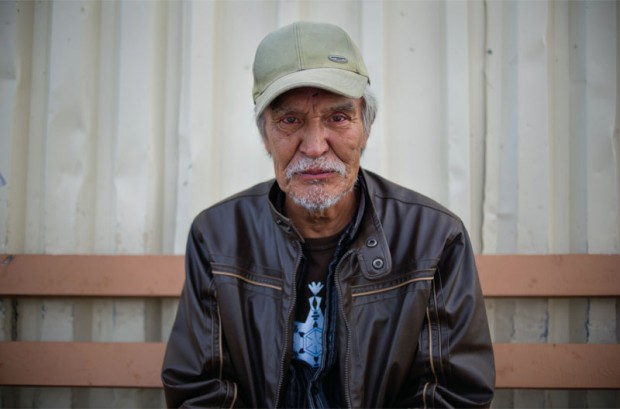 Band elder Wilfred Marcel lost his daughter to cancer in 2003. She was 30 years old.

After more than forty years of chiefs and band elders complaining about the effects of pollution from the oil sands and tailings ponds, it took the publicly stated opinion of Dr. John O’Connor and independent environmental assessments by Dr. David Schindler and Dr. Kevin Timoney to finally draw media and public attention to Fort Chipewyan’s health and environmental concerns. The chief and council of Fort Chipewyan have called upon the Canadian government for an independent public health inquiry for over a decade. In that time, hundreds of Fort Chipewyan’s residents have died of unexplained cancers. Band elder Wilfred Marcel (above) lost his daughter Stephanie to cancer in 2003. She was 30 years old. 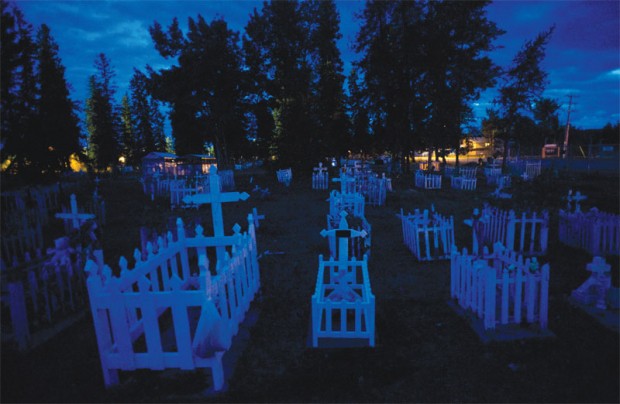 The cemetery in Fort Chipewyan. Hundreds of residents have died of unexplained cancers.