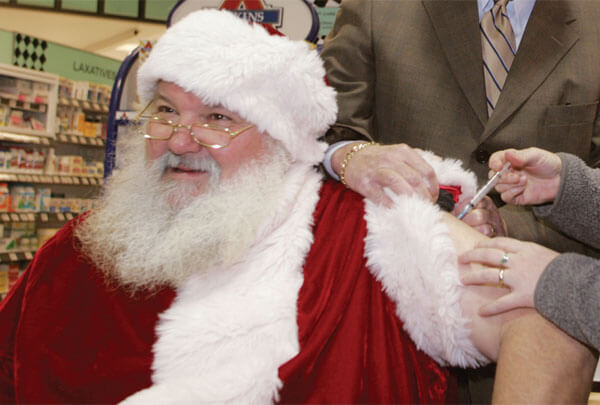 As an elderly person, Santa was fast-tracked for the H1N1 shot.

Dear Progressive Detective: I’m afraid of needles. Is it okay if I skip my flu shot?

Sorry, but in the Progressive Detective’s opinion, belonephobia, the fear of needles, is no excuse for skipping this oh-so-important vaccination.

The obvious reason for getting it is to avoid illness. While it’s easy to scoff at the flu, it’s actually serious business. Every year an estimated 4,000–8,000 Canadians die from this disease, which can cause life-threatening conditions such as pneumonia and respiratory failure. The flu can wreak havoc on your bankbook, too. The illness’s expected fever, severe headaches, and chest congestion are likely to knock you out for several days, so unless you have sick leave, you’ll be feeling the flu’s impact on your wallet long after the pain of a needle would have faded.

But the most important reason for getting stuck is to protect those around you, especially people at high risk of flu complications: children, the elderly, and anyone with a compromised immune system. Getting the flu shot leaves you less likely to pass the virus on to someone who didn’t (infants under six months of age and anyone allergic to its components should not get the shot) and contributes to the phenomenon known as herd immunity: the more people immunized, the less likely those who skipped the shot are to get sick (and the less taxing flu season is on our health-care system). However, herd immunity requires a critical mass, so getting the flu shot is the socially responsible thing to do.

But if you truly cannot get over your fear, be extra vigilant with the precautions you should already be taking to prevent the flu: wash your hands frequently, avoid crowds, and cover your mouth when you sneeze. You should also steer clear of any at-risk loved ones, even if it means sitting out some holiday parties.

One final note: the seasonal flu shot will not protect you against the H1N1 virus (swine flu); you’ll have to get a second shot for this.