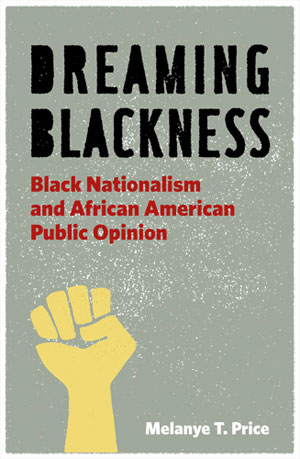 The unprecedented election for president of an African American south of the border probably looked to many like the culmination of a grand process of inclusion. African Americans, the story goes, can now see their efforts for civil rights and participation in the American Dream as embodied in Barack Obama. The struggle is over and there remain no racial tensions. But this, of course, is only a story. The reality is conceived quite differently for many African Americans, according to Melanye T. Price in her new book, Dreaming Blackness: Black Nationalism and African American Public Opinion.

In the book, Price courses through the history of scholarly thought on the black American experience. The case of the historically maligned and oppressed minority group has generated a great deal of thought and discussion and, even, potential solutions. Too many to name, the two most pronounced and enduring of them are the Integrationist and the Black Nationalist approaches. The former can be characterized as the prescription for African Americans to include themselves in the body of the American political, economic, and cultural system. The latter prescribes the very opposite: separation, but not segregation, and self-sufficiency. Price provides a succinct definition early on: “support for black self-determination through control of homogenous black institutions, support for black economic and social independence in the form of self-help programs, psychological and social disentanglement from whites and white supremacist notions of black inferiority, and support for a global or Pan-African view of the black community.”

Price’s book does not read as a polemic making the case for Black Nationalism. She does not argue that it is the only way African Americans can shake the spectre of domination they’ll continue to endure unless they create for themselves their own forms of organization. She does not make the argument that it would be a good for the soul and the psyche of the African American community or that Black Nationalism, paradoxically, is the best means towards achieving genuine integration and racial harmony (since real equality must always rest on the foundation of mutual respect for each other’s self-created achievement). Price, instead, tracks the level at which the African American community — broadly speaking — supports Black Nationalist principles. It appears a sizable number do. Perhaps the American public as a whole would do well to finally recognize this serious strand of African American thought.