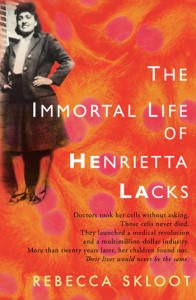 Chances are Henrietta Lacks has been a part of your life. Without actually seeing her, Lacks could have helped you recover from surgery or a rare medical treatment. And while you might not know who she is, you may have heard of her alter ego: HeLa.

Henrietta Lacks lived only to the age of 31, and it’s the acute case of cervical cancer that killed her that also brought change to the world. During radiation treatment, doctors scraped her cancer cells for research. Those cells eventually became known as HeLa, and they are immortal. HeLa cells continue to duplicate to this day, and they’ve been used in everything from polio vaccines to gene mapping to AIDS research.

It’s a truly fascinating story from a science and medical background – how one group of cells can live more than 50 years after the woman they came from died.

But it’s the back-story that sets The Immortal Life of Henrietta Lacks, written by journalist Rebecca Skloot, apart. Lacks and her family were unaware that her cells were harvested and used in medical research, and they only recently found out about her scientific importance. Her immediate family, currently based in Baltimore, never received any compensation for her cells—despite the fact that they were taken without permission and subsequently used by wealthy research companies.

As Skloot develops the story into a profile of Lacks and her family, we get an intimate profile of Henrietta’s daughter, Deborah, as well as her sons and husband. Immortal Life reads like a murder mystery most of the time, even though we know who committed the crime.

“I always thought it was strange, if our mother cells done so much for medicine, how come her family can’t afford to see no doctors? Don’t make no sense. People got rich off my mother without us even knowin’ about them takin’ her cells, now we don’t get a dime.”

It’s easy to praise The Immortal Life of Henrietta Lacks: it’s engaging and well-written. But the importance of the book might be just as overlooked at Henrietta herself, who has been rarely praised as the person responsible for saving lives around the world. This book goes some way toward correcting that original injustice. The Immortal Life of Henrietta Lacks shouldn’t be placed on the bookshelves of only those interested in medical research and history—the story weaves itself through various genres, and is related to politics, race relations, gender studies and health care. Skloot proves that Lacks is: “An unsung heroine of medicine.”

In the end, medical research is about people, and it’s people like Lacks and her family we should be reading about to understand our current health policy, what it means to the average Canadian, and what our health system could become. The media is often to blame for taking science reporting and leaving it at that—cells and researchers and technical terms. But it’s who that research is helping that should be the focus.