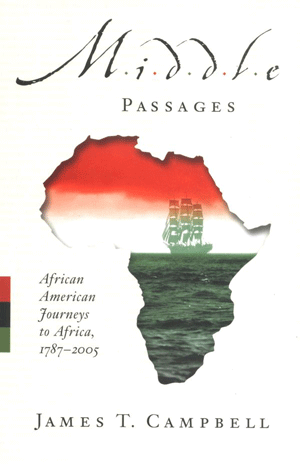 The story of Africans being brought to the Americas, mainly in bondage, is well known. The transatlantic slave trade has been exhaustively mined and narrated and, if the plot is misunderstood, one only needs to peruse the history books for clarity. We know relatively little, though, about African-Americans and their voyages back to the other side of the Atlantic. James T. Campbell’s Middle Passages: African American Journeys to Africa, 1787-2005 tells that story.

Campbell’s book begins with an account of repatriated slaves in the years following the American Revolution. The emigration movement that led many ex-slaves back to African as missionaries in Sierra Leone and Liberia is recounted here. The book tells also of notable African-Americans, like Langston Hughes, W.E.B. Du Bois, Richard Wright, Malcolm X, Maya Angelou and others, who made their way to Africa for one reason or another. Hughes’ story, for one, is indicative. Leaving America in 1923 as a messmate for the steamer, the West Hesseltine, the poet believed the Africans he was bound to meet would regard him as a long-lost brother. Instead they see him as white — but not only because he was the product of miscegenation, and therefore had lighter, tawnier, skin and wavy hair. Hughes was also fully Americanized by then and the Africans regarded foreign-born Africans as little more than extensions of white rule; as “clerks and administrators in the colonial governments, to help carry out the white man’s laws.”

By the time Malcolm X had visited Africa, he envisioned a kind of pan-African unity binding the independence movements in Africa during the 1960s and the civil rights movement in the United States. His journey to Africa was caused by a deep alienation from the country of his birth and a romantic vision of connection with Africa. He felt that the African-Americans’ salvation lies in his or her immersion in Africa. And so he went to Africa to convince members of the United Nations to introduce a resolution charging the United States for its abuse of African-Americans.

The motivations behind these voyages vary. For some, it was borne out of a desire for salvation; for others, Africa was something to reject or alter and they set sail to act like missionaries in the “Dark Continent”.

Personally, as an African-Canadian, I understand what some of these people might have felt. A longing to experience a deeper engagement with the place of your ancestral past — either out of a sense of alienation from your current residence or in light of romanticized depictions picked up from, say, family members — is a natural feeling. Campbell’s new book illustratively brings these complex thoughts and feelings to mind.