Above I’ve embedded a video made by Scott Thomas, design director of Barack Obama’s 2008 presidential run, stumping for a book he’s working on called Designing Obama. And in classic Barack-the-vote style, he’s relying on a web-savvy, crowd-sourced, grassroots internet campaign to get it off the ground, requiring readers to collectively pledge the US$65,000 it will cost to start printing. (The donors will also have their names printed in the book. When the Teabag Revolution comes, they’ll know exactly who to go after.) Says Thomas: 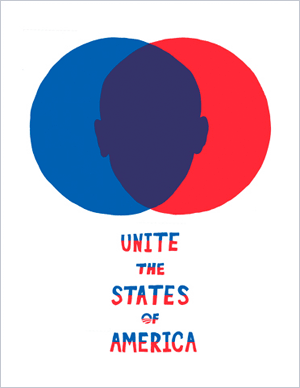 The Obama presidential campaign was innovative. For the first time in American politics, a candidate used art and design to bring together the American people—capturing their voices in a visual way. [I’ve] collaborated with artists and designers to create Designing Obama, a chronicle of the art from the historic campaign. Get the inside story on how design was used by the campaign, and scope out the pieces, created unofficially, by grassroots supporters.

The bloom’s off the rose a bit in Barack Obama fanboy land, what with the backpedalling on torture prosecutions, still gunning for Afghanistan, and stalling on civil rights measures. But it’s still nice to remember electric feel of last fall, when the Obama presidency was pure potential—not to mention the most aesthetically beautiful campaign ever seen.