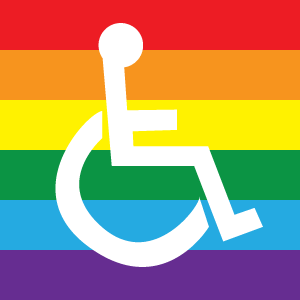 If you combine my disability with Queerly Canadian writer Cate Simpson‘s sexual orientation, you may at least approximate the person who should be writing ThisAbility this week. Nevertheless, as a straight male, I’ve still been hearing rumblings of this problem among LGBT friends (and friends of friends) with disabilities for years, even though I don’t have any first-hand experience with it myself. Gerald Hannon summed up the issue in The Body Politic way back in 1980:

“Somehow, way [in the] back of our first closet, we’ve built another one, and into it, we have shoved our gay deaf, our gay blind and our gay wheelchair cases.”

When Killacky was out with his able-bodied partner at the time, he told The Blade it was as if he wasn’t even there. “People leaned over my wheelchair and asked Larry,’How is he feeling?'” Apparently, the girls don’t have it any easier. “They think, ‘I can’t be together with a disabled woman because I’ll have to take care of her,'” Susan McDaniel Stanley, a lesbian with spinal cerebellum degeneration, told The Blade. Corbett O’Toole, a wheelchair user who runs Disabledwomen.net, told them it comes down to this: “The lesbian image is of a woman who can work and support her lover. If you’re disabled, it’s hard to be seen as sexual no matter how ‘out’ you are. If I’m in a bookstore, lesbians think I just need help getting a book off the shelf. They wouldn’t ask me out for coffee.”

One man from Long Beach California was so desperate to vent, he posted the following on the Long Beach Equality message board:

“I decided to finally come out of my shell after two years, be active in the community and socialize. What I have found is the moment I’m asked what I do for a living and I tell them I’m disabled, the conversation stops as if I have the plague…This has been coming from people who are so mad that they are being treated as a second-class citizens for not being allowed to marry, yet they treat people in just the manner they are screaming about.”

The disabled community and those who support it are just as dismissive to their LGBT brothers and sisters.  In her groundbreaking article in Abilities Magazine, “Nothing to Hide: Gay People with Disabilities Come Out of the Closet”, Anna Quon interviews a man who often rode the Handibus with drivers who refused to wheel him into gay bars to meet his partner in the 80s and early 90s. The homophobia among the disabled population continues.  In rehab, Killacky noticed that all the sexual health information was for heterosexuals and when he went to a conference for artists with disabilities there were no openly gay disabled people there and the  paraplegic comedienne made homophobic jokes.  Some people have gone as far as suggesting that the queer individual is just “confused” and what they believe to be their sexual orientation is really just a byproduct of the disability itself.  Gay disabled comedian Greg Walloch mocks this sentiment in hilarious fashion during his one man show F**k the Disabled!

However, the worst affront to the disabled LGBT community comes in the distinct lack of resources and support groups behind it, especially in North America.  The UK has done a much better job supporting the disabled LGBT community through Disability Now, their national disability magazine, and the columns dealing with the issue within. They also have one thing no country in North America has — a national organization for the disabled LGBT community known as Regard. Of course, that shouldn’t surprise anyone who regularly reads this blog. I’ve frequently mentioned how much better mobilized and aggressive UK disability activism is. The BBC supports LGBT awareness in the community with the Ouch! website and podcast, while the CBC’s Disability Matters column ground to a halt in 2006 due to budget cuts.

Speaking of Canada, typing “Gay and Disabled in Canada” in Google yields Quon’s article as its most high-profile result. No Canadian organizations, no Canadian groups and no Canadian websites, and while Quon’s article broke down the door, it is now well out of  date. Perhaps Canada’s last hope in dealing with LGBT issues specific to disability lies in Toronto’s famously progressive cooperative sex shop Come As You Are and its disability-friendly books, toys and workshops.

Those deaf and blind LGBT people Hannon mentions at the top of this entry did get their support groups in the form of BFLAG (the blind community’s answer to PFLAG) and RAD (The Rainbow Alliance for the Deaf). RAD is still around, but BFLAG is no longer in operation. To me though, it hardly matters because blindness and deafness often barely affect your looks, at least not in the jarring way a wheelchair can frequently diminish your prospects. Many hearing impaired and blind individuals admit they can “pass” for able-bodied in a dating environment.  To me, if any disabilities  deserve LGBT support, it’s those ones that are most noticeable. Yet, people with mobility disabilities have nothing recognizing their LGBT population. C’mon, even queer stutterers have their own LGBT organization before people with mobility disabilities. Guter and Killacky tried with their Bent Voices magazine, but even that ran out of steam. (The archives can be found here.)

Despite this lack of support or acknowledgement, gay people with disabilities still have to navigate these chilly social waters on their own, often forced to believe in their own potential as lovers when no one else will. When Guter fell in love with his college roommate, he found this out the hard way:

“He asked me, ‘Do you ever think you’ll find a man who will sleep with you?'” For Guter, that was the challenge that, he told The Blade, “mysteriously engendered hope.”  He responded, “Yes, if I find the right man.”