The commercial fishing industry is costing us more than just the price of our seafood platters. With seafood consumption at a record 16.7 kilogram per person, our appetite for fish is putting the entire ocean ecosystem at risk. But the seas aren’t the only thing in danger. We humans depend on those waters for food, income, and even our air. This is how our love of seafood is threatening ourselves as well as our blue planet.

On the menu: B.C. Farmed Salmon 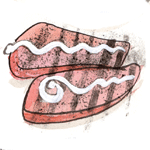 Forty percent of our seafood comes from aquaculture. However, it’s hardly the sustainable solution that many believe it is. Farmed ﬁsh are fed wild ﬁsh, with four to ﬁve kilograms of wild stock being used to produce one kilogram of farmed. Coastal farming also infects wild ﬁsh with diseases and parasites. In British Columbia, wild pink salmon are on the brink of extinction from aquaculture sea lice. The disappearance of these ﬁsh will impact everything from the grizzly bears and orcas that rely on them for food to local communities such as Echo Bay, which rely on them for jobs. 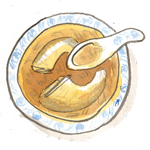 On the menu: Sharkfin Soup

High demand for shark ﬁn soup in China has led to an explosion in sharkﬁnning. Thirty-eight million sharks are now being killed annually for their ﬁns, reducing some species by 80 percent over the last 50 years. Losing these top-level predators disrupts the underpinning of the food chain, creating an imbalance that has been linked to the collapse of certain ﬁsheries, such as the Tasmanian rock lobster ﬁshery, where the lack of sharks has resulted in an increase in octopuses, a main predator of the lobsters. 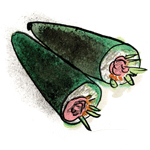 On the menu: Seaweed

The world’s ﬁshing ﬂeets are also negatively impacting such key habitats as coral reefs, wetlands and mangroves. Destroying these environments, and the vegetation within them, sabotages marine reproduction, the ocean’s ability to ﬁlter toxins, and, perhaps most importantly, its ability to create oxygen. Seventy percent of the world’s oxygen is produced by a healthy ocean, so we are taking our very breath away with marine habitat loss. 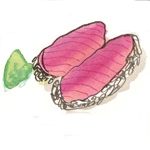 On the menu: Tuna Sushi

Eighty percent of the world’s ﬁsh stocks are fully or over-exploited, including the highly endangered blueﬁn tuna, a ﬁsh prized in the sushi market. If demands are not hampered, the world’s ﬁsh stocks will collapse by 2048, causing catastrophic effects on the 170 million people employed in the ﬁshing industry and the 2.9 billion who depend on it for food. 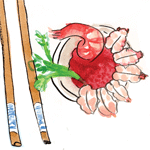 On the menu: Shrimp in Cocktail Sauce

Each year, millions of non-targeted species, such as sea turtles and dolphins, are accidentally caught as by-catch. This “by-kill” is then either thrown back into the sea or illegally traded, further decimating ﬁsh stocks and encouraging the trade of endangered species. While by-catch is a problem for almost every ﬁshery, it’s at its worst with shrimp trawling. Of the 5.3 million tons of shrimp caught annually, 35 percent are discarded, usually because the animals are too small or the wrong sub-species.