Back in July of 2009, the Canadian government launched an eight week public consultation on copyright reform.  Members of the public were invited to let their will be known surrounding issues such as fair use, copyright terms, ISP neutrality and a host of other issues. With over 8,300 respondents in total an astounding 6183 people made it known that they opposed another bill C-61 (a meager 54 respondents favoured the bill)

Bill C-61, of course, was the draconian U.S. DMCA-style copyright reform bill that former Industry Minister Jim Prentice introduced to parliament in June of 2008. The bill was ultimately abandoned when an election was called that fall, but has remained on the periphery since. The Conservatives have attempted to pass copyright reform three times without public consultation, bending to the will of industry lobbyists.

So, finally, the public has spoken and in near unison oppose the claustrophobic sanctions of bill C-61. Canadians, in fact, are a much more generous and trusting population than we could have guessed. The overwhelming majority support stronger fair use/fair dealing protection, shorter copyright terms, and believe individuals should be protected from liability for non-commercial use. Moreover, as popular as lightening copyright restrictions was, the opposite is equally equally true: only 153 respondents favour limiting or halting unauthorized filesharing and only one, one single respondent, supported fining those for copyright violation.

So what does this mean?  Essentially, Canadians are asking for the very opposite of what the government has been trying to pass for years. The question now is whether current Industry Minister Tony Clement is listening.

After the jump, the full results of the questionnaire, courtesy Michael Geist: 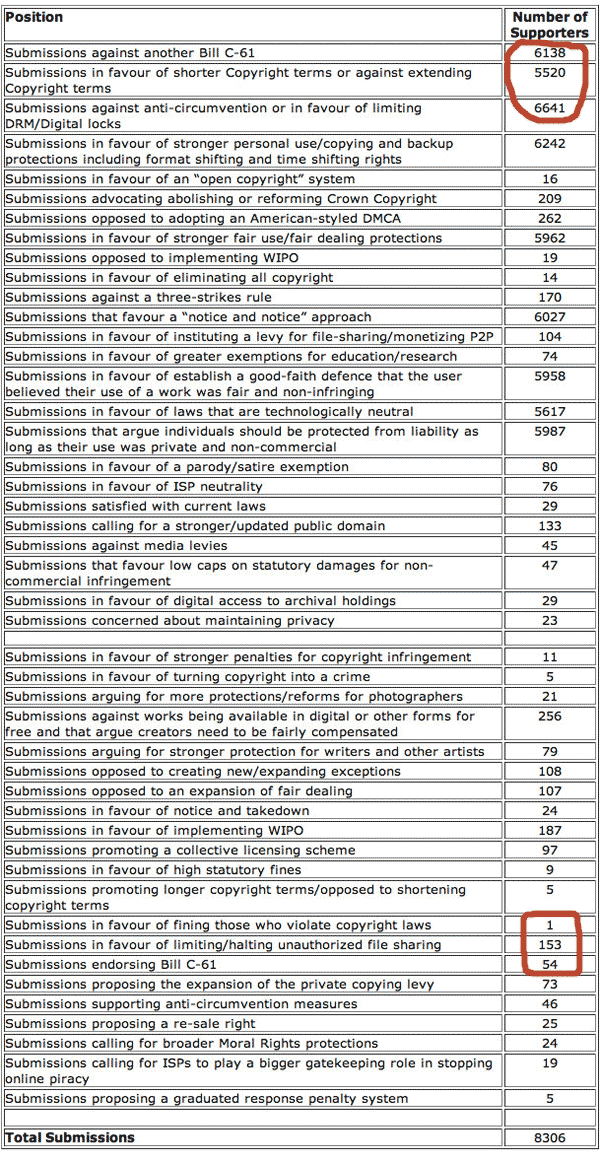